Across the nation, tribal languages are vanishing at an alarming rate, taking with them a vital piece of culture. While the Montana legislature has taken steps to preserve and promote tribal languages in the state, the legislature should make funding for the Montana Indian Language Preservation Program (MILP) and language immersion programs permanent, rather than one-time-only. These programs are an important step forward in improving student outcomes, strengthening communities, and preserving culture, language, and history in Montana.

In 2013, the Montana Legislature established the Montana Indian Language Preservation Pilot Program, providing $2 million to support language preservation efforts by tribal governments.[1] The Legislature extended the program in 2015 with $1.5 million and in 2017.[2] However, by 2017, the Legislature had reduced funding to $1 million.[3] 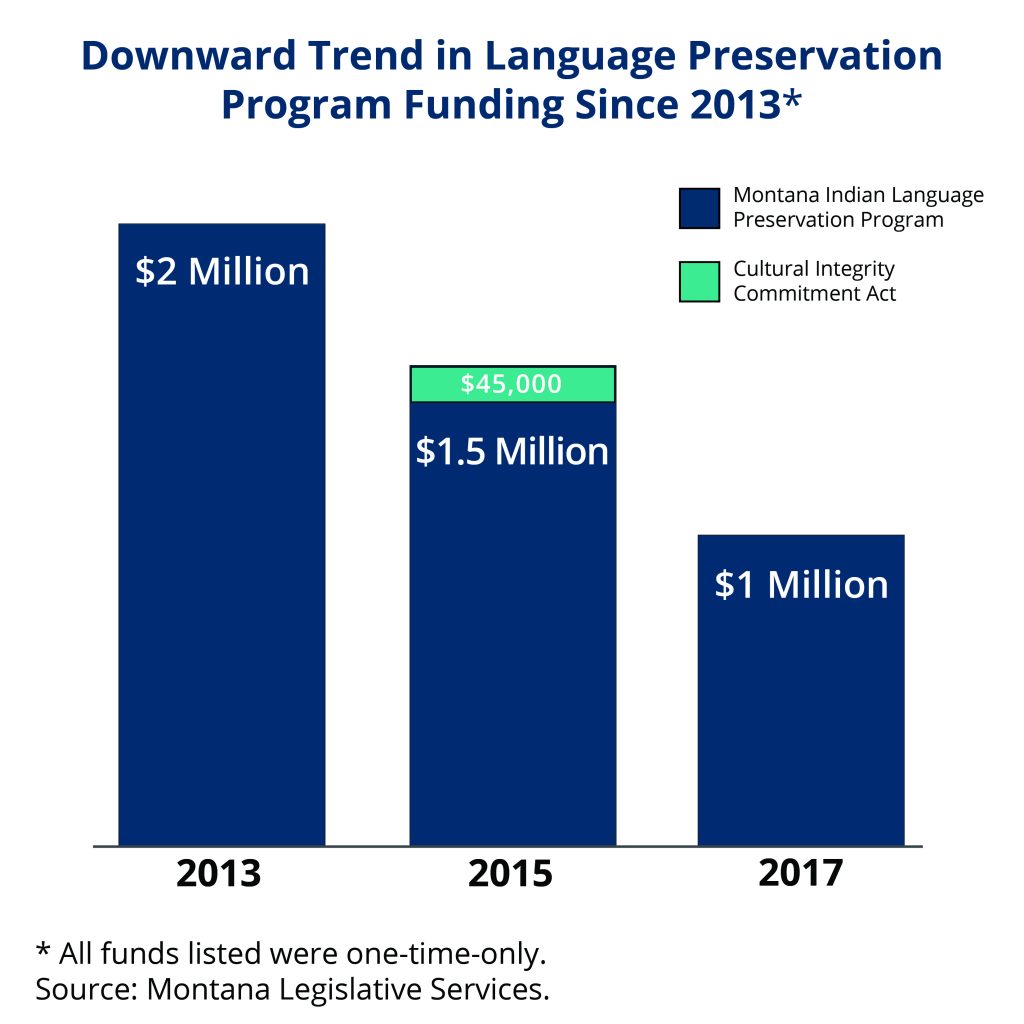 Without further action by the Legislature, funding for both MILP and the language immersion programs will end in 2019.

These programs have helped curb the trend in tribal language loss by spurring the creation of language education courses, dictionaries, sound books, and Montana tribal nations language apps, as well as by increasing school districts’ capacity. As a result, all Montanans now have greater access to tribal languages. In order to continue to build on the successes of this program and curb further loss of tribal languages, the Legislature should adequately invest in MILP in the 2019 legislative session.

Of the more than 300 tribal languages once spoken in the United States, only 175 remain. If no action is taken, experts estimate that by 2050, no more than 20 will be spoken.[8] Montana is home to nine of these languages.[9] Assiniboine, Gros Ventre, and Montana Salish are critically endangered, meaning “the youngest speakers are grandparents and older, and they speak the language partially and infrequently.”[10] This is an issue because languages that are not spoken by children are at great risk of becoming extinct, or of having no remaining speakers.[11] Unlike speakers of “world” languages, such as Spanish and French, who can be found around the world, speakers of tribal languages tend to live on tribal homelands, meaning shrinking communities of speakers are not replenished.[12] Therefore, we likely lose tribal languages forever when there are no remaining speakers on tribal homelands.

·       Preservation of Montana culture and history.

Increased sense of identity and self-esteem

Language-based curricula and instruction promote a strong sense of cultural identity.[18] This is important for a number of reasons. When schools include tribal language in the curriculum, students tend to have increased self-esteem, experience less anxiety, and show a greater level of self-efficacy,[19] which then impacts the likelihood of substance abuse and suicide risk among students. In fact, American Indian youth who have a stronger sense of cultural identity and knowledge of tribal language are less likely to fall into drug and alcohol abuse,[20],[21] more likely better able to cope with stress, and less likely to have suicidal thoughts.[22] Given the high suicide rates among American Indian youth in Montana, language preservation could be considered one of the tools used to address the issue.

Language immersion programs impact how students relate to themselves and their environments, in part by offering unique opportunities that bring family members and members of the community into students’ learning environment.[23] This fosters positive child-adult relationships both inside and outside of the classroom, in addition to strengthening family bonds and building community.[24] The Blackfoot language immersion program, for example, expects parents to attend weekly meetings to better understand what students are learning in the classroom.[25] This creates a supportive environment for students and provides the opportunity for students to practice language outside of the classroom, ultimately exposing more members of the community to the language.

Continued investments in language preservation will provide the opportunity for more in-depth work toward preserving these valuable languages and will further strengthen the relationship between the State and tribes in Montana.

[11] Crawford, James. “Endangered Native American Languages: What Is to Be Done, And Why?” The Bilingual Research Journal. 1995. https://ncela.ed.gov/files/rcd/BE021828/Endangered_Native_American.pdf.

[14] Demmert, Jr., William G., and John C. Towner. “A review of the research literature on the influences of culturally based education on the academic performance of Native American students.” 2003. Northwest Regional Educational Laboratory, Portland Oregon. https://eric.ed.gov/?id=ED474128.