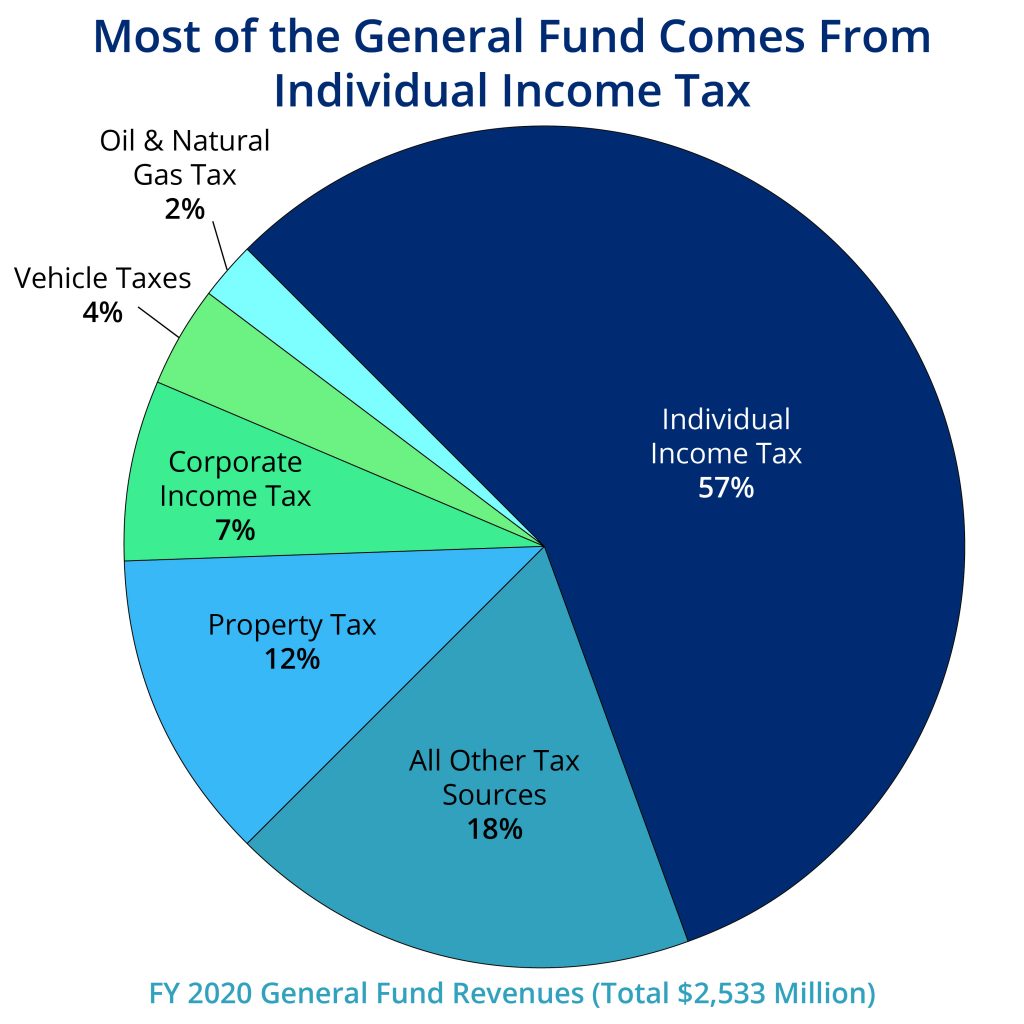 For generations, our tax dollars have served as shared investments in the programs and services that make our state a great place to live, work, and play. Tax dollars enable Montanans to work together to achieve things which we could not do alone - educate our children, build and maintain infrastructure, keep our air and water clean, and pave the way to a stronger and more inclusive economy. Corporations that operate in Montana (whether they own property, pay staff, or sell products) are required to pay a tax as a percentage of their net income earned in Montana. In turn, corporations benefit greatly from our shared investments. For example, corporations hire workers educated through Montana’s public schools and colleges, utilize infrastructure like roads and water systems, and benefit from Montana’s legal system. 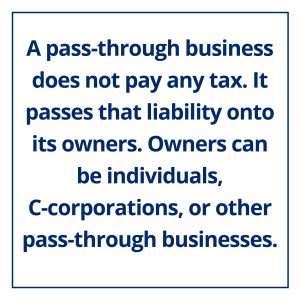 Specifically, if the business is structured as a C-corporation in order to receive the legal benefits associated with such a status (including limited liability for debts and business actions and access to capital markets), its taxes would be classified as corporate taxes. All other businesses, including sole proprietorships, partnerships, limited liability corporations, and S-corporations, report income on individual returns. This amount is reflected in both pass-through income and business income, which comprises 21 percent of total individual income.[2] 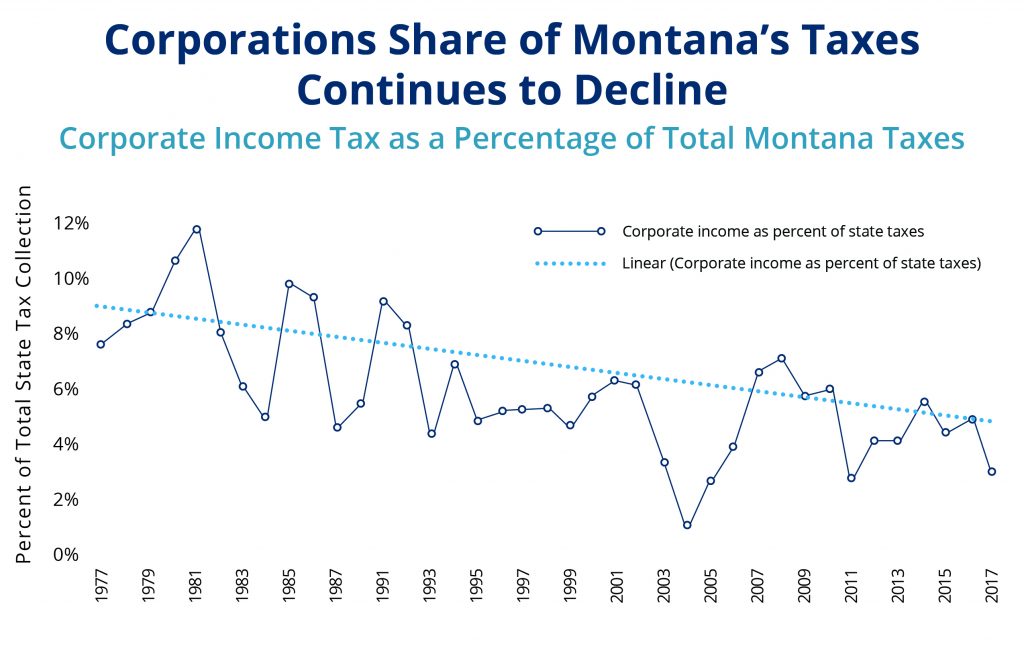 Most Montana Corporations Pay the $50 Minimum

According to Montana’s tax code, corporations pay either 6.75 percent of their net income earned in Montana or $50, whichever is greater.[5] In 2016, Montana had more than 16,000 C-corporations, and only a third of them paid more than the $50 minimum corporate tax.

The phenomenon of corporations paying little to no state taxes has been well-documented nationally. A 2017 national study found that 92 profitable Fortune 500 companies paid no state income taxes in at least one year between 2008 and 2015.[6] During the same period, 240 profitable Fortune 500 companies paid an effective state corporate income tax rate that was less than half of the actual average tax rate in these states, costing state governments roughly $126 billion in lost revenue over those eight years.[7]

Many profitable corporations are able to avoid paying state corporate income taxes because of: 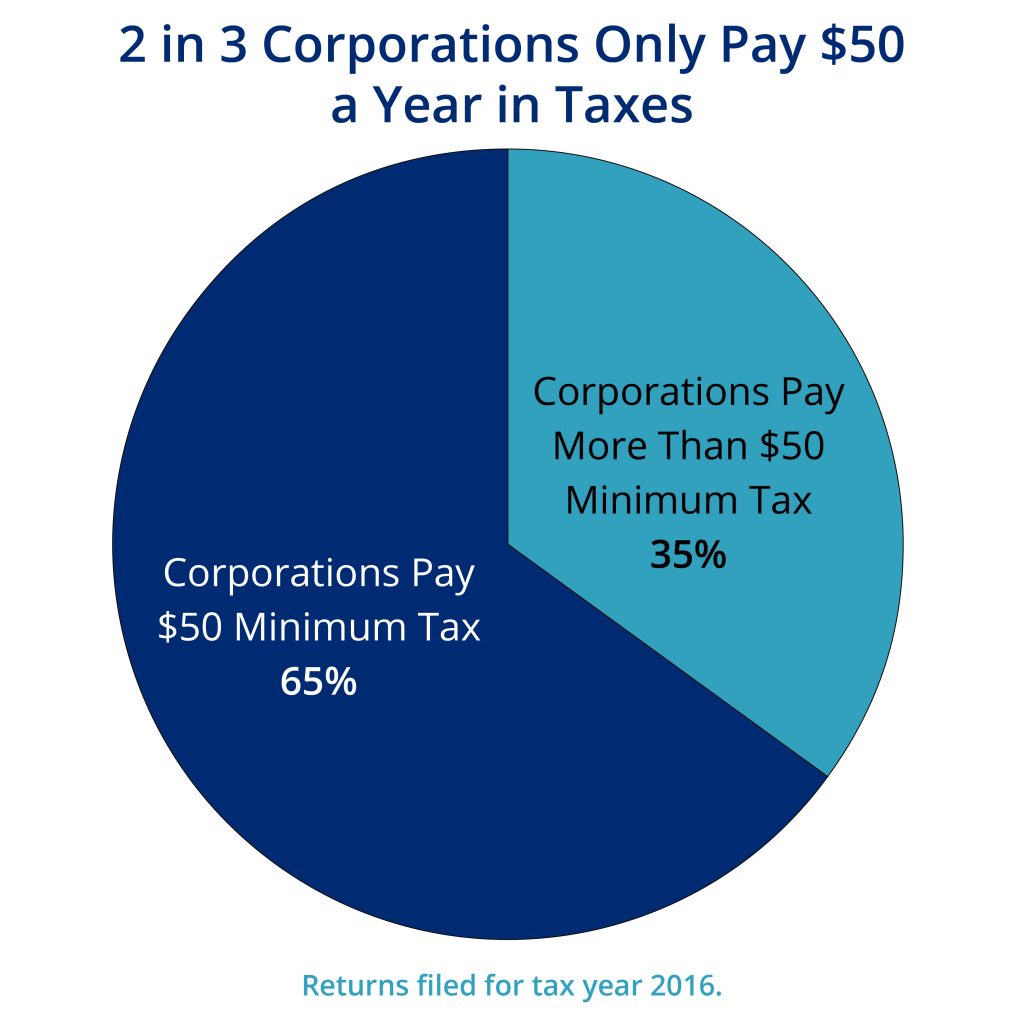 The minimum corporate tax in Montana has been $50 since 1969.[9] Had this tax kept up with inflation, today’s minimum amount would be more than $360.[10] Updating the corporate minimum tax to account for past inflation and making sure it automatically adjusts for future inflation would modernize our tax system and slow the decline in corporate income taxes. Increasing the corporate minimum tax to $360 would raise at minimum $3.3 million in additional revenue per year.[11]

Another option for updating Montana’s corporate minimum tax is to set it at a corporation’s level of sales in the state, like Oregon has done. This proposal would update our corporate tax code to account for the multistate and even multinational corporations that file in Montana with very little taxable income, but lots of Montana sales.[12] As our modern economy has shifted to allow for online purchasing, Montana has been left out of that new revenue source. Setting Montana’s corporate minimum tax at 0.3 percent of Montana sales would raise more than $60 million in annual revenue and help update our tax code to reflect the current economy.[13]

While state corporate income tax liability is not publicly available, we know that many multinational corporations, such as Amazon, report record levels of sales and yet are able to use tax loopholes to reduce their tax liability to zero.[14] As a result, some multinational corporations with lots of sales pay very minimum income taxes in Montana. As costs rise for providing the basic public services, infrastructure, and education that benefit corporations, the contributions of those corporations should rise, too.

Some Good News: Montana Has Been a Leader in Combined Reporting

Combined reporting is an important policy tool that prevents corporations from utilizing a variety of tax avoidance strategies. Montana has been a leader in this area by using combined reporting for decades. Twenty-eight states with corporate income taxes and Washington, D.C., now utilize combined reporting.[15]

What Is Combined Reporting?

Many large companies consist of a parent company and its subsidiaries. Combined reporting requires a parent company to add its income and its subsidiaries’ incomes for the purposes of state corporate income taxes. Montana then taxes its share of the total income based on the level of activity in Montana. States without combined reporting are vulnerable to a wide array of tax avoidance strategies by corporations. The tax avoidance strategies usually involve artificially shifting profits to subsidiaries that are in states without corporate income taxes or that do not tax a specific type of subsidiary.

Combined reporting ensures that corporations that profit from doing business in Montana and benefit from our roads and schools pay their share of taxes in Montana based on their corporate activity in Montana. In addition, it improves fairness for smaller Montana-based companies. Local companies do not have subsidiaries across the country to which they can shift profits. Without combined reporting, large, multistate companies could engage in tax avoidance strategies that give them a competitive advantage over smaller, local businesses.

Montana requires worldwide combined reporting, which means that corporations with common ownership must report all income worldwide, unless they make a “water’s edge election.” The water’s edge election allows multinational corporations to only report their income from the United States, rather than their worldwide income. In exchange, these companies agree to pay a 7 percent tax rate, rather than the normal rate of 6.75 percent.

There are some limits to the water’s edge exclusion of international income. If a subsidiary is located in a country that is a known tax haven, the corporation may not exclude that subsidiary’s income even under the water’s edge election. In order for this exception to be useful and avoid inappropriate income shifting, the list of tax havens must be updated regularly in Montana law.

The water’s edge election creates an uneven playing field for Montana-based businesses without an international presence, as it allows multinational businesses the opportunity to shift profits overseas without paying state corporate tax reflecting actual operations in the state. Tax haven abuse has grown exponentially over the past several decades, as more and more corporations have become international in scope and the industry of tax attorneys and accountants specializing in international tax planning has expanded. A 2015 report by Congressional Research Service estimates the overall loss of revenue to the United States as a result of offshore tax shelters at around $100 billion per year.[16] The number of corporations that filed a water’s edge election in Montana increased 202 percent from 2007 to 2016.[17] A proposal to eliminate the water’s edge election has been proposed but has not passed in the past several legislative sessions. The most recent proposal in 2019 would have raised approximately $6.3 million in additional revenue.[18]

The net operating loss carryback, a relatively obscure and costly feature of the income tax code, allows corporations experiencing an operating loss in the most recent tax year to file amended tax returns for the three previous years, deducting up to $500,000 of the current year’s loss against any profits earned in those previous years.[19] The corporation can elect to receive a refund or apply the refund to the next year’s tax liability. Montana is one of only 17 states that still allows the net operating loss (NOL) carryback deduction.[20]

The NOL is particularly harmful during economic downturns. Individuals and corporations earn less during downturns and, in turn, tax revenue to the state decreases. Allowing businesses to receive a refund for previously paid taxes serves only to further compound Montana’s revenue problems during downturns. As a result, the state may struggle to fund essential public services like education, health care, prescription drugs, and child care assistance at a time when many Montanans need them the most. Eliminating the NOL carryback would bring in much-needed revenue, decrease the volatility of corporate tax revenues, and avoid unnecessary, self-inflicted fiscal damage for the state.

If the NOL carryback were eliminated, businesses could still utilize the NOL carryforward. This provision allows businesses to carry their net operating losses forward and deduct them against future profits, providing tax relief for corporations during difficult times, but not at the expense of fiscal responsibility.

Tax expenditures are often described as ‘‘silent spending.’’ They come in the form of preferences such as tax deductions, exemptions, deferrals, exclusions, credits, or lower tax rates given to individuals or businesses. Tax expenditures are considered a form of spending because they allocate funds for specific public purposes, but not through direct appropriations. These expenditures are commonly referred to as tax loopholes or incentives. They have a significant impact on state revenue as they reduce or eliminate revenue that would have otherwise been collected. Tax expenditures are not inherently good or bad policy. However, just like other state spending, they should be reviewed and evaluated on a regular basis to evaluate whether they are meeting the intended goals.

The Department of Revenue creates a report of tax expenditures each biennium. While the 2019 Legislature passed a law requiring review of tax credits once a decade, there is no requirement that all tax expenditures are reviewed regularly by the Legislature.[21] Corporate tax expenditures cost Montana between $9 million and $15 million per year.[22] For more information about tax expenditures, see Montana Budget & Policy Center’s 2019 report, “Where Is the Money Going? It Is Time to Look at Montana’s Tax Expenditures.”

Reforms for a Stronger Montana

All Montanans want a strong economy where small businesses can thrive, where workers can support their families, and where our children can stay in Montana and find meaningful work. To create a more inclusive and prosperous economy for future generations, we must continue to invest in our education systems, in our infrastructure, and in the health and safety of our communities. The corporate income tax is an important way to pool our resources to make sure that those investments happen. The following reforms would modernize Montana’s corporate income tax system and strengthen our ability to invest in a stronger and more inclusive economy:

[11] This is a conservative estimate of the amount of revenue an increase in the minimum corporate tax would generate, as it is calculated using the number of corporations currently paying the minimum $50 tax. It does not include corporations currently paying between $51-$359 who would also be affected by the increase. MBPC calculation using Montana Department of Revenue, "Biennial Report: July 1, 2016- June 30, 2018."

[14] Institute on Taxation and Economic Policy, “Corporate Tax Avoidance in the First Year of the Trump Tax Law,” Dec. 16, 2019.