On December 22nd, 2017, President Trump signed into law the Tax Cuts and Jobs Act, putting in place permanent corporate tax cuts and temporary individual income tax cuts disproportionately benefiting wealthier households. In total, the law will result in a nearly $1.5 trillion increase to the federal deficit over ten years, likely forcing deep federal budgetary cuts in the near future.[i],[ii] Making matters worse, this act could also result in a loss of state revenue, as Montana’s tax code links to changes in the federal law.

Montana lawmakers can and should respond to federal actions to mitigate any loss of revenue to the state. The federal tax bill also injects uncertainty on how taxpayers may respond to the changes, which could also impact state tax decisions and revenue. Furthermore, Montana’s ongoing budgetary crisis and the fact that the federal Tax Cuts and Jobs Act is heavily tilted toward the wealthiest households are reasons for state policymakers to continue to look at tax fairness measures that will ensure adequate revenue to maintain services for communities across our state.

In general, the federal tax plan puts in place permanent and deep cuts to corporate tax rates, while providing only temporary and modest tax cuts to most individual taxpayers.

The law temporarily lowers individual incomes tax rates, expands the child tax credit, increases the standard deduction, and scales back several itemized deductions. The bill permanently modifies how tax brackets are adjusted for inflation by using a less generous inflationary rate. This change will result in most people paying more in taxes in later years. The federal savings are used to partly pay for the permanent corporate tax cuts over time.

Factoring in all changes to individual income taxes, in 2025 (when most of the bill’s provisions would be in place), households with income over $1 million would see a tax cut of an average of $25,000. While middle-income households will receive a modest tax cut initially, by 2027, when many of the provisions expire, many middle-income families will be facing a tax increase. Those at the top would still be receiving a tax cut. (see figure on page 1). 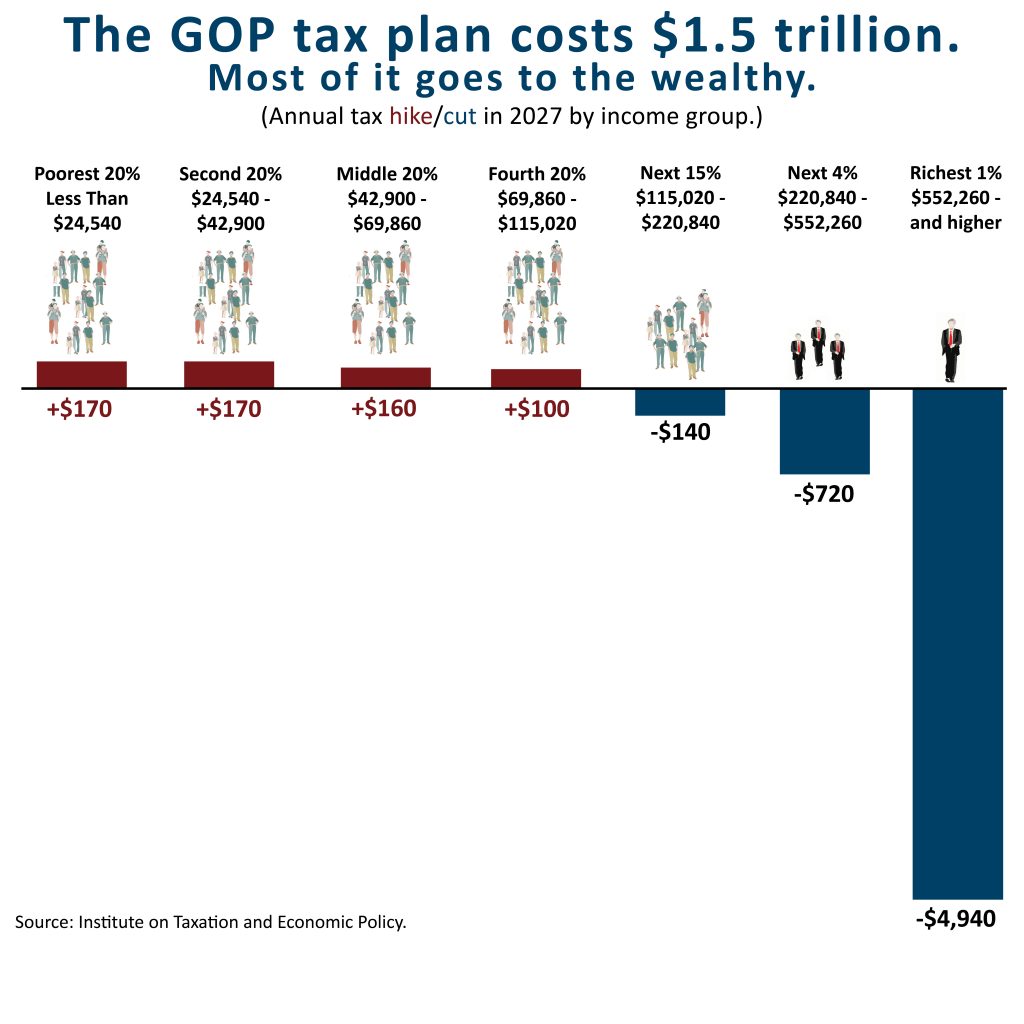 The federal tax legislation cuts the corporate tax rate from 35 percent to 21 percent starting in 2018. The law also sets a zero tax rate on future foreign profits of multinational corporations. While some provisions are meant to raise taxes, including the elimination of some corporate deductions and expanding what entities are subject to the tax, the overall net impact significantly cuts taxes for corporations.[iii]

The law permanently repeals the ACA’s requirement that people get health insurance or pay a penalty. This action will result in 13 million fewer Americans having health insurance. As healthier, younger individuals drop insurance, those with insurance in the marketplace will see their premium costs go up, making coverage out of financial reach.[iv] For a family of four accessing coverage on the marketplace, premiums would increase by $2,100 annually.[v]

In many instances, state tax laws piggyback on the federal tax code, so when federal tax laws change, it can also result in changes to state tax laws. These provisions vary state by state, and some changes could result in increased revenue while others could result in a loss of revenue (see appendix). Factoring in all changes made by the 2017 Tax Cuts and Jobs Act, the Montana Department of Revenue estimates that Montana will see a net loss of state revenue in 2018 and subsequent years (see table).[vi]

Several provisions of the new federal law will significantly lower federal taxes on corporations, and some of these changes will also impact state revenue. The largest tax cut on the federal level comes from a reduction to the federal corporate tax rate, from a graduated income tax with a top rate of 35 percent to a flat 21 percent rate.[vii] This rate change will not affect Montana’s corporate income tax rate.

Congress included several measures to expand the number of businesses that are subject to certain taxes, and these are important changes to both federal and state corporate tax policy. For example, the federal law eliminates the domestic production deduction, which was provided to primarily large corporations for a range of activities, including manufacturing, filmmaking, and publishing.[viii] Montana is one of several states that had not decoupled from this federal deduction, so the elimination of the federal deduction will also result in the elimination of the state deduction.[ix]

However, several other corporate tax changes will result in significant loss in state revenue. The biggest change is the expensing rules for corporations, allowing a business to deduct the total cost of machinery and equipment in addition to certain types of real estate and computer software in the year in which it is placed into service. This is known as “full expensing,” rather than deducting only a portion of the cost each year over the useful life of the purchase, called “depreciation.” The bill also expands similar expensing rules for smaller businesses.[x] In total, these new expensing rules will cost the federal government over $110 billion in lost revenue over the next decade.[xi] Montana law mirrors the federal expensing rules, so this will also result in a loss in state corporate income tax revenue.[xii]

Partnership: a type of business owned by two or more partners, where profits and losses of the business are divided among and passed through to the partners.

While Congress included some sidebars on when this new deduction can be taken, there are significant questions as to whether these changes on a federal level will change taxpayer behavior. For example, some high-income workers may be inclined to shift their status from an “employee” to an “independent contractor”, organized as a pass-through entity, to take advantage of the new deduction. The extent to which this change in behavior may occur is unclear, but potential shifts toward greater pass-through income could impact state revenue collections.

Furthermore, policymakers should look at other changes to state tax policy to deal with taxpayer behavioral changes that could increase the pass-through income and therefore decrease state revenue. The Montana Department of Revenue often faces challenges in collecting income tax that is tied to pass-through income due to the complexity of their ownership. In Montana, 381,000 resident and non-resident taxpayers reported ownership of one or more of the 58,240 pass-through entities registered in Montana in 2014.[xiv] Because ownership of a pass-through business can include individuals (both resident and non-resident), other pass-through businesses, and corporations, the complexity of their structures can often present challenges in tax administration and collection.[xv]

For partnership owners, more than three-fourths are non-resident individuals or out-of-state business entities. Nearly all of the Montana income derived from partnerships comes from the wealthiest four percent of partnerships (with incomes in excess of $5 million annually).[xvi] Pass-through entities within the financial sector make up one of the larger sectors (by income level), with more than half of their income (over $35 billion) derived from capital gains.[xvii] Taxpayers with ownership in these businesses benefit from the state capital gains tax credit, which taxes capital gains income at a lower rate than income earned from wages. Thus, many of these entities will now also benefit from an additional federal deduction on the same income. Montana should discuss state policy changes to pare back the capital gains tax credit.

Montana Must Act to Mitigate Loss of Revenue

At a minimum, Montana policymakers should enact proactive state policy changes to hold the state harmless from the direct negative impact of the federal tax bill. As reported by the Montana Department of Revenue, Montana stands to lose over $12 million in state revenue in 2018 and nearly $16 million in 2019.[xviii] The legislature can take steps to limit the loss of revenue, including:

In Montana, the wealthiest 1 percent of taxpayers will receive federal tax cuts averaging in the tens of thousands of dollars annually. Furthermore, as the bill increases the federal deficit by nearly $1.5 trillion, Congress’ second step is likely to cut investments made to states and local governments for health services, infrastructure, and education. States that receive significant federal revenue, like Montana, should find ways to offset these effects. Montana should consider changes to recapture some of the tax windfalls by implementing state tax fairness reforms that ensure adequate revenue, including:

[i] “Estimated Budget Effects of the Conference Agreement for H.R. 1, the ‘Tax Cuts and Jobs Act.’” Joint Committee on Taxation. December 18, 2017. https://www.jct.gov/publications.html?func=startdown&id=5053.

[v] Center on Budget and Policy Priorities. “How Does the Final Republican Tax Bill Affect Your State?” December 19, 2017. https://www.cbpp.org/research/federal-tax/how-does-the-final-republican-tax-bill-affect-your-state?utm_source=The+Federal+Scoop&utm_campaign=98ecebff54-EMAIL_CAMPAIGN_2017_12_22&utm_medium=email&utm_term=0_e3f339ce06-98ecebff54-111146177.

[xi] “Estimated Budget Effects of the Conference Agreement for H.R. 1, the ‘Tax Cuts and Jobs Act.’” Joint Committee on Taxation. December 18, 2017. https://www.jct.gov/publications.html?func=startdown&id=5053. This includes the increase to the section 179 expensing, and the extension, expansion, and phase down of bonus depreciation rules.