Problems with a Statewide Sales Tax: Montana Needs to Help (Not Hurt) Families

As Montana grapples with a state budget crisis, lawmakers and the public are asking questions about a statewide sales tax in Montana. Montana is one of only a handful of states, including Alaska, Delaware, New Hampshire, and Oregon, that does not impose a statewide sales tax.[1] Montanans need a fair tax system that raises revenue to support our schools, public health, and community infrastructure, as well as one that does not unfairly rely on raising revenue from those living on lower and moderate incomes.

A tax system is considered regressive when households living on lower incomes pay a larger portion of their income in taxes compared to those households with higher incomes. Unfortunately, nearly every state in the nation takes a greater share of income for taxes from families living on lower and middle incomes than from the wealthiest households. 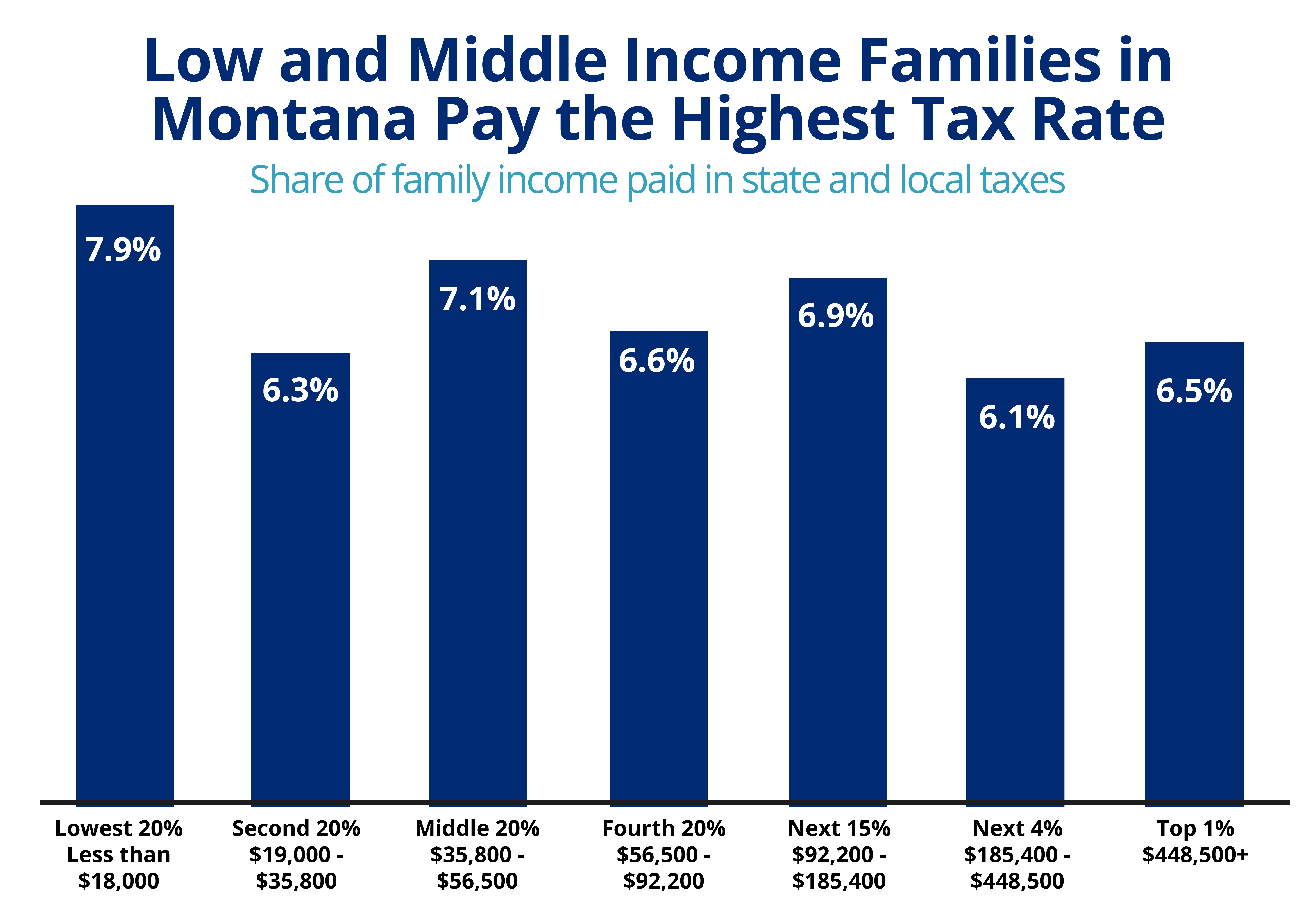 While Montana ranks as one of the least regressive tax systems, families living on lower incomes still pay a greater share of their income in state and local taxes than higher-income households. While the top 1 percent of households pay 6.5 percent of their income in taxes, the bottom 20 percent pay 7.9 percent, a 20 percent higher rate.[4] However, part of the reason that Montana’s tax system is less regressive than surrounding states is that Montana has a progressive income tax (although less so after 2003, as will be explained later) and does not rely heavily on sales taxes.

Implementing a statewide sales tax would disproportionately hurt families living on lower and middle incomes, particularly when compared with other revenue proposals, such as reestablishing a top income tax bracket on high-income earners or changes to the capital gains tax credit. Sales and excise taxes are the most regressive form of taxes. Families living on low incomes pay almost eight times more of their income in these taxes than wealthy families, and families living on middle incomes pay­ five times more.[5] State rates for sales taxes range from 2.9 percent in Colorado to 7.25 percent in California.[6] The average state’s consumption tax structure taxes the families with the lowest incomes at a 7.1 percent rate, compared to 4.8 percent for families with middle incomes, and just 0.9 percent for the wealthiest households.[7] 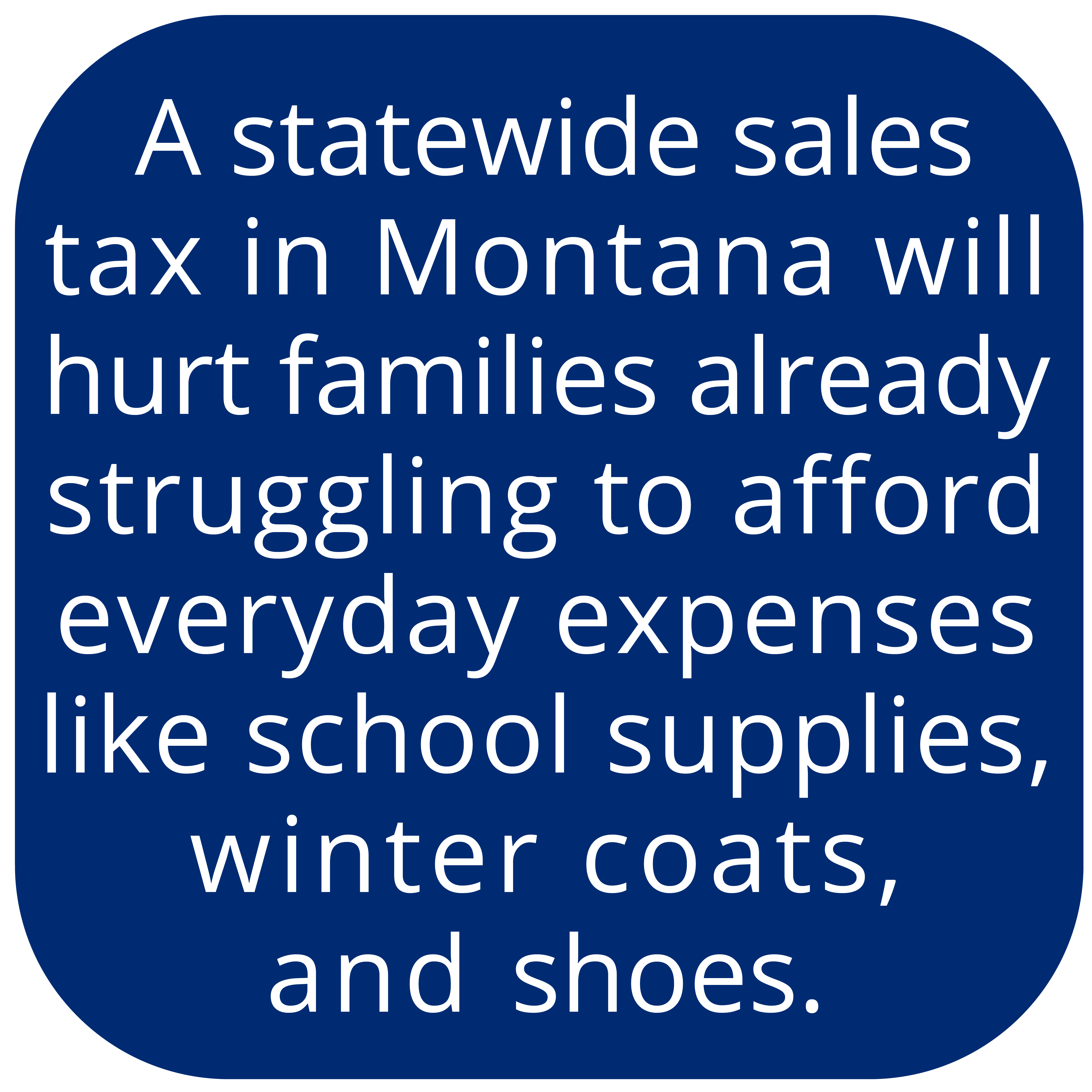 While some states have attempted to mitigate the harm of sales taxes on families living on lower incomes, sales and excise taxes – by definition – disproportionately impact these households. Most states provide some sort of exemption or reduction of rate for food and/or prescription drugs, and 16 states have some sort of exception for nonprescription drugs.[8] Even with an exemption or reduction of the rate for food and prescription drugs, a sales tax still impacts many products that families need, like school supplies, winter coats, and shoes. A sales tax could put purchasing a car necessary for work out of reach or exacerbate an already out of control housing market for families living on low wages.

Policymakers often raise the idea of implementing a statewide sales tax as a replacement for the state individual income tax or state property tax, two of the largest streams of revenue that are less regressive than a sales tax.[9] As seen in past proposals, a statewide sales tax, with the elimination of either income or property tax, would result in a significant net loss of revenue.[10] House Bill 300 in the 2019 Legislative Session could have resulted in a revenue loss to local governments of more than $150 million per year, the same amount as approved to clean up the Superfund site in Butte, Montana, which has been on the nation’s list of most toxic sites since the 1980s.[11],[12]

Furthermore, this policy change would make Montana’s tax code less fair. House Bill 300 would have increased the state and local taxes paid by 95 percent of Montana households (those with incomes up to $200,000).[13] The wealthiest 1 percent of households (those with more than $501,000 in income) would have received an annual tax cut of $6,330 on average, and those with incomes between $200,000 and $501,000 would have received an average annual tax cut of $1,450.

In Montana, we have a few already-established excise taxes or local sales taxes, targeted at certain goods or services.[14] The state often uses this revenue to pay for services related to the goods sold. For example, a portion of cigarette tax revenue goes toward smoking cessation programs. Below is the list of state and local excise taxes in Montana:

Expanding Excise Taxes Is Not a Long-Term Solution

In addition to being the most regressive tax, excise taxes are often insufficient revenue-raising tools, because they decline in value over time. Excise taxes are usually set at a per-unit basis, rather than a percentage of value, so the revenue generated by the tax is eroded over time.[22] Rates must con­tinually be increased to keep pace with inflation. Using excise taxes to close fiscal gaps means balancing state budgets on the back of taxpayers who are the least able to pay, and these revenues represent a short-term fix rather than a long-term solution.

In Montana, there are 10 communities that have put in place a local “resort” tax.[23] In order to impose such a tax, a community must have a population of less than 5,500 for an incorporated town (or 2,500 for unincorporated area) and a major portion of its economy based on tourism. Once the Montana Department of Commerce certifies an area qualifies as a resort, the local voters must affirmatively vote on the tax rate, duration, effective date, and allocation of the revenue on a ballot initiative. A portion of the revenue must go toward property tax mitigation. The resort tax applies to a narrow list of goods and services targeted at tourists, including accommodations, restaurants, bars, and ski resorts or other destination recreational facilities.[24]

A recent proposal to allow other non-resort communities to extend a local option sales tax would disproportionately hurt families living on low incomes and put many rural, struggling communities at an even greater disadvantage. Unlike statewide sales tax options that allow a state to implement targeted assistance to families living on low incomes, a local option sales tax provides no effective mechanism to mitigate the harm.[25] With the exception of a handful of Montana’s largest urban communities, the vast majority of Montana communities are unlikely to benefit from this option. As we have learned from local mills and bonds, some communities cannot or will not impose local taxes. This would continue to draw a deeper divide between communities of means and communities without.

In fact, Montanans who are American Indian would disproportionately feel the negative impact of a local option sales tax. A number of factors hamstring reservation economic opportunity, including a limited access to grocery and retail stores. This is due, in part, to the historical injustices of colonists that isolate reservation communities from mainstream economic life and make developing reservation economies challenging.[26] The legacy of this past requires families living on reservations to travel to regional shopping centers for their everyday needs. In addition, barriers to higher education and employment and ongoing discrimination have resulted in lower average incomes for American Indians in Montana.[27] As sales taxes are regressive, families living on lower incomes pay a larger share of these taxes as a share of their income than families living on higher incomes.

Legislators have raised the issue that Montana should find a way to tax online sales, such as sales on Amazon; however, this idea by itself is unrealistic and likely a way to push for a statewide sales tax.[28] In 2018, the United States Supreme Court decided that states can mandate that businesses without a physical presence in their state, but conducting a certain amount of business in the state, pay sales tax. [29] However, without a statewide sales tax, Montana still faces limitations on its ability to tax online sales. Montana would likely face constitutional challenges in treating online companies differently than companies with a physical in-state presence.[30] Unfortunately, there are constitutional hurdles to imposing such a law without enacting a statewide sales tax.

Instead of taxing everyone, including our friends and neighbors with the least ability to pay, Montana should consider a variety of tax fairness measures that will bring in much-needed new revenue, but also impact fewer people.

Unfortunately, Montana had a much more progressive tax system before 2003 when the Legislature collapsed the tax brackets and lowered the rates for the wealthiest.[31] In 2003, the Legislature reduced individual income taxes, which largely benefited the wealthiest households. This law reduced the number of tax brackets, from ten to seven, and lowered the top tax rate from 11 percent to 6.9 percent. Today, Montana workers making just a little more than minimum wage ($17,900) pay the same top tax rate as someone with income of more than $1 million.[32]

Furthermore, Montana also taxes dividends and income from the sale of stock at a lower rate than income earned from wages. Montana is one of only nine states that provides a lower tax rate on capital gains.[33] This tax break largely benefits the super wealthy and costs our state more than $40 million in lost revenue every year.[34]

Montana has better options than a sales tax for needed revenue, including:

[2] Institute on Taxation and Economic Policy, “Who Pays? A Distributional Analysis of the Tax Systems in All 50 States, Sixth Edition,” Oct. 2018.

[3] Institute on Taxation and Economic Policy, “Who Pays? A Distributional Analysis of the Tax Systems in All 50 States, Sixth Edition,” Oct. 2018.

[5] Institute on Taxation and Economic Policy, “Who Pays? A Distributional Analysis of the Tax Systems in All 50 States, Sixth Edition,” Oct. 2018.

[7] Institute on Taxation and Economic Policy, “Who Pays? A Distributional Analysis of the Tax Systems in All 50 States, Sixth Edition,” Oct. 2018.

[22] Institute on Taxation and Economic Policy, “Who Pays? A Distributional Analysis of the Tax Systems in All 50 States, Sixth Edition,” Oct. 2018.

[25] While proposals such as HB 577 and SB 331 in the 65th Legislative Session required that a portion of the new revenue go toward property tax mitigation, this mechanism cannot target assistance to those most impacted by the tax, as a state can do with income tax credits that are tied to income levels.