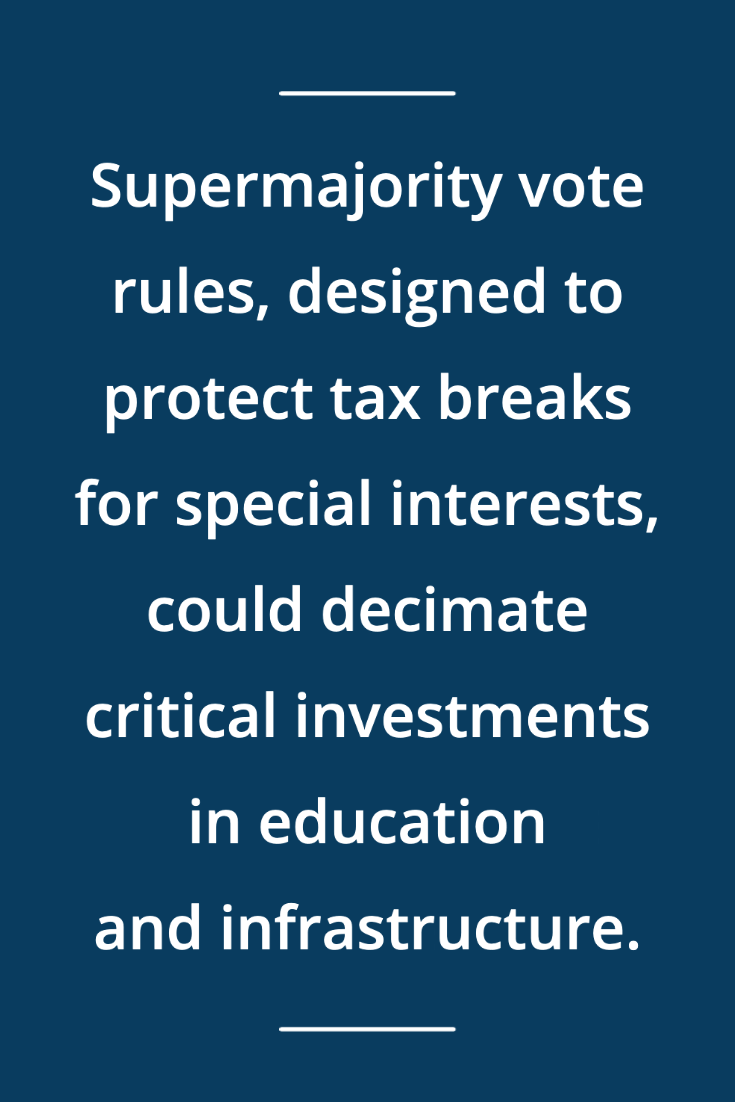 This legislative session could bring a dangerous proposal to require a supermajority of the Legislature to consider increases to taxes or fees, shifting significant power to just a handful of legislators.[1] Most legislative bills, including tax cuts, require only a simple majority, or just more than half of each house, to pass. Supermajority rules require two-thirds or even three-fourths of each house of the Legislature to support any measures that raise revenue.

Supermajority proposals severely limit the ability of the state to pay for public education, long-term care for our elderly to live with dignity, and infrastructure in our communities. They have an undemocratic history, stemming from racist Jim Crow era policies that sought to keep wealthy white landowners from funding public education for recently freed Black Americans. Montana would do well to stop any supermajority proposals in their tracks.

Montana’s tax code is riddled with tax loopholes that special interests have put in place over several decades. All told, these deductions and tax credits cost our state tens of millions in lost revenue every year.[2] A supermajority rule would make it more difficult for policymakers to remove these tax breaks. Instead, a handful of out-of-state corporations and super-wealthy individuals would be able to use these tax loopholes to avoid contributing equally to the Montana we love.

When the wealthiest fail to pay their fair share, local communities, residential property taxpayers, and average families are asked to pay more when demand for public services increase.[3] For example, in part due to increasing property tax exemptions, in the last few decades, the share of property taxes falling on the backs of homeowners has risen, from less than one-third in 1994 to almost half today.[4] Under a supermajority rule, revenue shortfalls could force local school districts and municipalities to ask residents to pay an even greater share.[5]

States that have supermajority requirements for raising revenue do not have these same requirements for cutting taxes and budgets. The result often is that over time, the state’s tax base and revenue shrink, and lawmakers struggle to pass even modest proposals to increase revenue and ensure the state can provide adequate services for our communities.

States such as Oklahoma and Nevada have struggled to adequately fund state budget needs as a result of their supermajority rules. Since Oklahoma’s supermajority was put in place in 1992, disinvestment has been widespread. The state made the largest cuts to school funding in the nation and decimated mental health funding.[6] These deep tax cuts resulted in far greater revenue losses than originally projected for Oklahoma. In 2018, Oklahoma lawmakers within the majority leadership called for reconsideration of the supermajority rule, acknowledging that it has been “impossible to pass necessary revenue measures to provide for adequate core services in Oklahoma.”[7] Nevada’s state and local school districts have cut support for K-12 education by nearly 20 percent over the past decade.[8]

Supermajority requirements have been particularly devastating for infrastructure, such as highway construction. Federal highway dollars require matching state funds often funded through state gas tax revenue. Of the seven strict supermajority states, five of them have not raised their gas taxes in more than 25 years, resulting in deteriorating infrastructure.[9]

One need only look to our founding fathers for insight into how supermajority vote requirements stymie our democratic process. As James Madison noted, requirements for a supermajority to pass laws go against the “fundamental principle of free government.”[13] After the Civil War, state efforts to enact supermajority rules were closely linked to the Jim Crow era and efforts to defund schools and other services for Black Americans. States such as Mississippi, Louisiana, and Arkansas put in place these types of rules to protect a small group of wealthy white landowners from potential tax increases.[14] Supermajority rules have since spread across the country. Today, 17 states have some form of supermajority requirement related to taxation.[15]

Montana can learn from the cautionary tales of other states, where supermajority rules have benefited a few at a great cost to their budgets, economies, and communities. In Montana, a supermajority rule would further hamstring our Legislature’s efforts to close costly and unfair tax loopholes for special interests. This lack of control over the state budget could prove especially harmful amid the COVID-19 pandemic and recession, when the need for government services and other interventions are high. To protect against senseless cuts to education and social services now and in the future, Montana policymakers should vote against this unfair and dangerous policy proposal.

[5] While some proposals include a supermajority vote for fees, it is unclear the extent to which this requirement would cover some fees at a local level, such as tuition and other service fees.