State Surplus Should Support Communities: What does Montana do with $1.9 billion?

As we move toward the 2023 legislative session, Montanans and legislators need to answer an important question: what do we do with $1.9 billion in state general fund surplus?[1] This surplus is a once-in-a-generation opportunity and arrives on the heels of economic struggles, high inflation, and community services still impacted by an ongoing health pandemic.

The surplus offers the opportunity for the Montana Legislature to pass policies and a budget that invest in our communities. Why do we think this is the best approach? Two reasons:

First. For the last few sessions, the Montana Legislature has either passed budget cuts or failed to invest in essential services across the state. We are now seeing the negative impacts in our communities, from housing and health care to education and infrastructure.

Second. We know that investments across the state will support the health of our communities and ultimately support us as we strengthen our local economies. We have seen this play out due to how some American Rescue Plan Act (ARPA) money was invested (for instance, critical food assistance for children and families).[2]

Let’s start with some essential context: how is the budget formed, and how have the last few sessions of budget decisions shaped the current access and cost of services across the state?

Here are some budget process basics:

Funding distribution throughout departments and across the state did not happen by accident. Here is a quick review of legislators' decisions regarding the budget in the last few sessions to understand how Montana fully arrived at today’s budget makeup.

In 2017, the ending fund balance was roughly $110 million, far below the anticipated $350 million ending fund balance.[4] By the end of February of the 2017 legislative session, legislators proposed cuts across the budget, to nearly all state agencies, including social service programs for seniors, people with disabilities, and our most economically vulnerable families, as well as funding for state colleges and universities. When factoring both proposed state cuts and the loss of matching federal dollars, legislators were recommending a total of $449 million in cuts to the budget.[5] 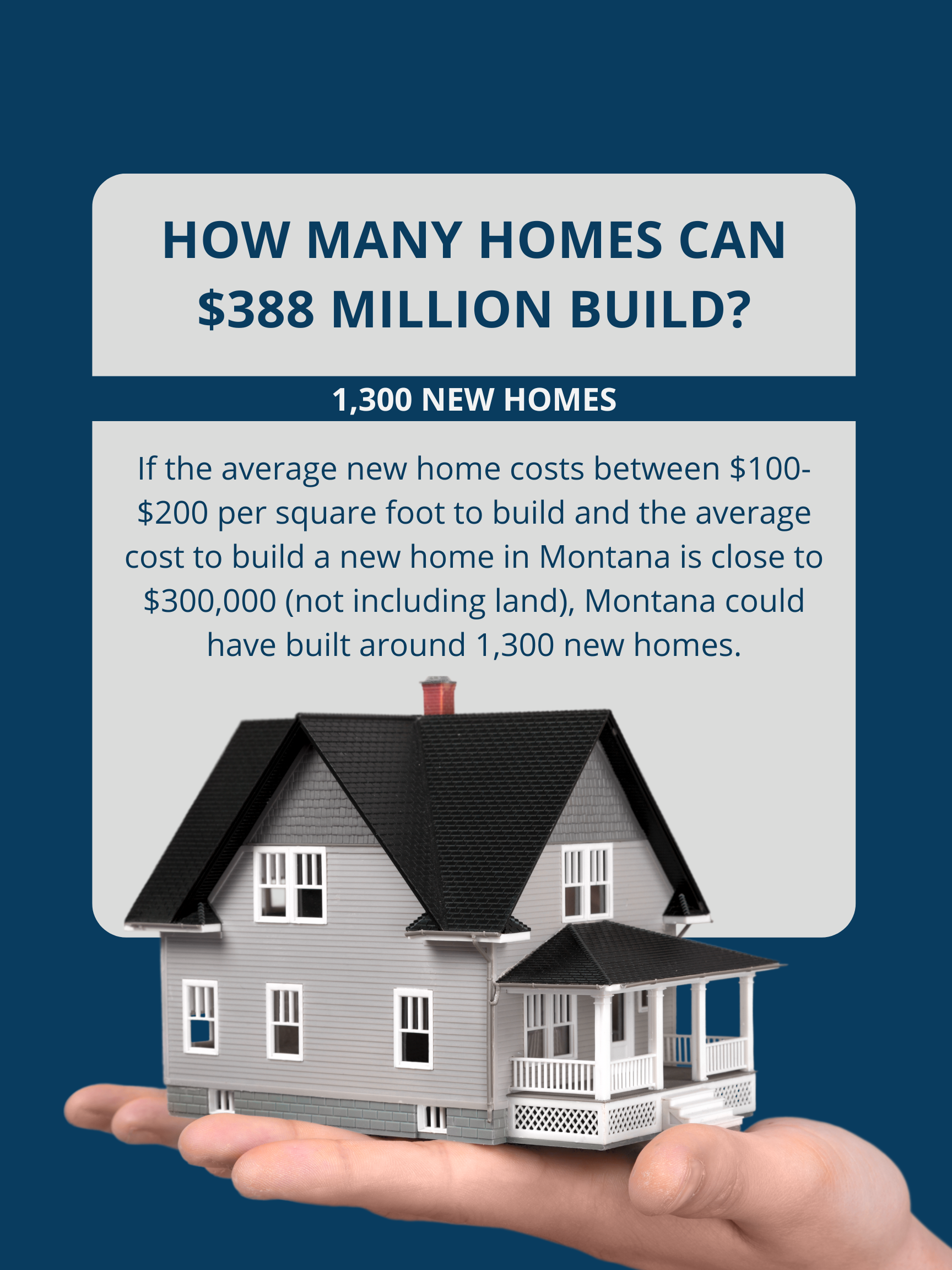 By April 2017, communities and advocates pushed back and reduced these cuts to $170 million.[6] Communities across the state felt the impact, but cuts did not stop there. The 2017 Legislature also passed a bill that triggered more cuts if state revenue failed to hit certain levels during 2017 and 2018. There were four tiers of automatic budget cuts triggered by lower revenue. By the summer of 2017, all four automatic budget cuts were triggered, resulting in an additional $97 million in budget cuts.[7]

Along with budget cuts, the 2017 legislative majority also refused to pass an infrastructure funding bill that would have invested almost $80 million into big capital projects, such as maintenance at schools and highways, and a public works package to fund rural water projects.[8]

During the November 2017 special session, legislators made $120.7 million in state general fund cuts to agencies, with the Department of Public Health and Human Services (DPHHS) hit the hardest.[9],[10] This resulted in a total of $388 million in budget cuts for 2017.

Montana experienced higher-than-expected revenues (in the order of millions of dollars) in 2018 but was still struggling to get through the impact of previous statewide budget cuts.[11]

In 2019, legislators continued to resist investment in services supporting Montana communities. While legislators were able to pass a pilot program in 2017 that funded pre-kindergarten in 18 school districts in Montana (out of the 302 total districts), the 2019 legislature failed to pass funding for a full pre-K program or even to continue funding the pilot program.[12],[13] Pre-K offers early education opportunities for children aged 3 to 5. These opportunities show big effects on the long-term outcomes for kids, including higher rates of high school graduation and lower rates of juvenile incarceration. Additionally, pre-K improves children’s social and emotional skills. Pre-K also offers support for low-income and working families, who may otherwise need to pay for private non-educational child care.

While the 2019 Legislature restored some of the funding cut in 2017 to state agencies and public institutions, Montanans cannot and should not assume that these monies went to replenish the funding to reduced or cut services. For example, nineteen rural offices of the Office of Public Assistance (OPA) were closed because of the 2017 budget cuts.[14] But when money was restored to the OPA budget, these offices never re-opened, leaving 19 rural communities without local support for navigating public assistance programs.[15]

The Pandemic and 2021 Session

The COVID-19 pandemic and subsequent economic recession exacerbated the loss of services caused by 2017 budget cuts. The impact of closed schools and businesses and the lack of available and affordable health and infrastructure services, paired with an influx of people moving to Montana as work-from-home became commonplace, all illuminated the deeply needed investments in our communities. Montana faced significant gaps in affordable housing options, reliable internet for telehealth or online K-12 classrooms, options for paid leave for workers to stay home when sick or to care for kids, and affordable child care options.

Despite clear needs in communities across the state, the 2021 Legislature failed to invest in needed services adequately. By the end of the session, Montanans saw multiple policy change attempts to provide needed services failing to pass. For example, HB 235 would have doubled the purchasing power of Montana residents who qualify for Supplemental Nutrition Assistance Program (SNAP) benefits and who have limited access to fresh fruits and vegetables. This bill would have supported Montana families and local farmers and invested in local economies. Instead, the governor vetoed the bill arguing the appropriation of roughly $100,000 was not a good use of general funds.[16]

More egregious were the debates and ultimate lack of investment in multiple sections of HB 2. Instead of investing in health care in our state, the Legislature rejected several attempts to boost investments in health care providers who provide critical Medicaid services to seniors, people with disabilities, and families living on lower incomes, through provider payment rates. The Legislature ultimately provided a mere 1 percent increase for some providers, well below what is needed. [17] Finally, legislators removed continuous eligibility, which previously allowed Montanans 12 months of continued coverage under Medicaid, removing unnecessary verification that could lead to interruption of health care.[18]

At the end of March 2021, Congress passed the American Rescue Plan Act (ARPA). ARPA was designed to direct federal dollars to states and communities to spend on economic relief needs. While legislators decided how to implement the funds statewide through HB 632, ARPA spending in the last year faced barriers and slow progress, in some cases resulting in the return of millions of dollars to the federal government or reallocation of ARPA funds to different programs. Local ARPA spending also significantly varied and did not always meet the needs of communities. 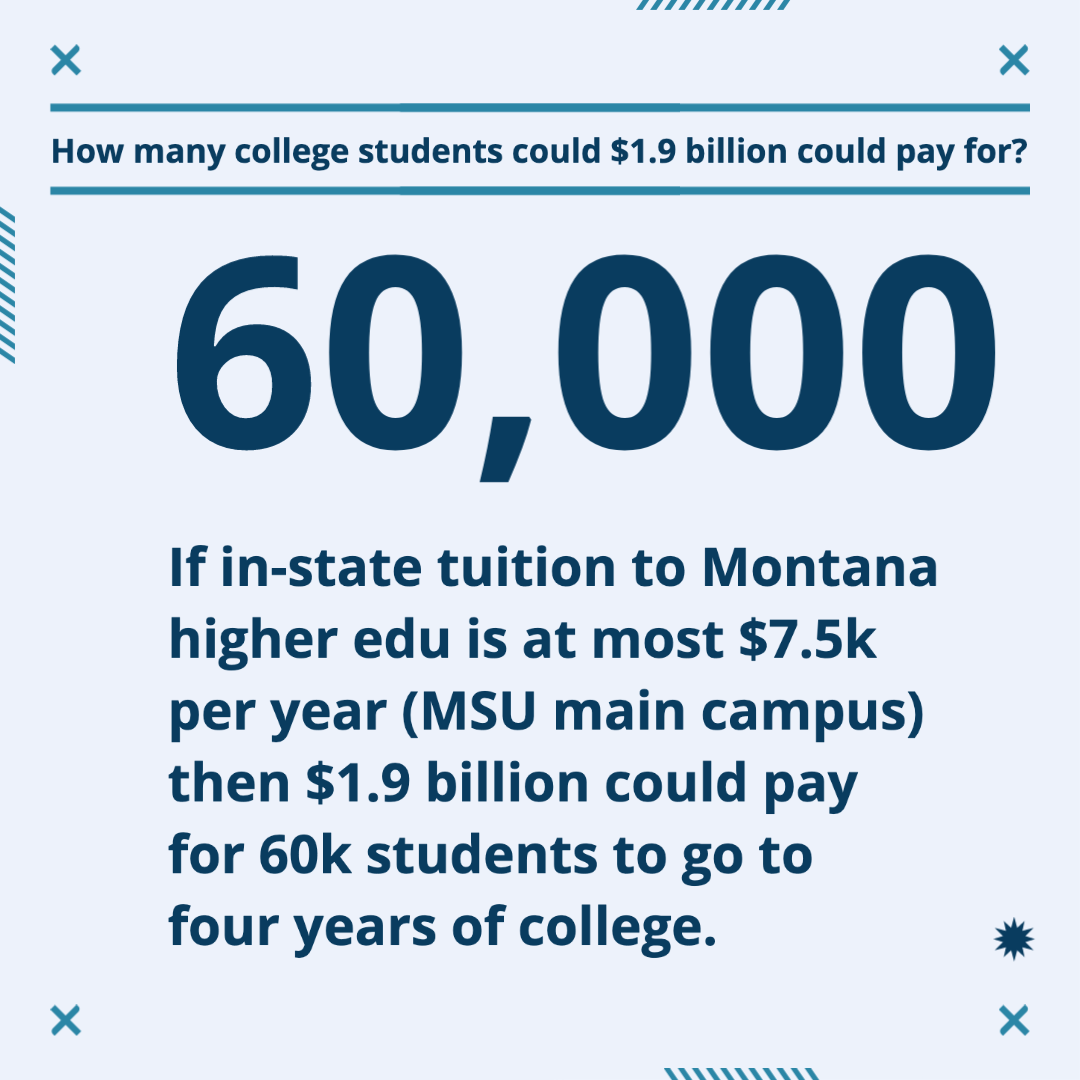 The Present: Where Did the Surplus Come From, and How Best to Use It?

One outcome of the pandemic was the increase of higher-income individuals moving into Montana.[19] This and inflation resulted in income taxes producing higher revenue for the state. Combined with the influx of federal dollars through Covid relief programs, Montana has over $1.9 billion in a revenue surplus.[20] This is six times higher than the usual of around $300 million.

Back to the important question: what does Montana do with over $1.9 billion come January 2023? As a reminder, the surplus exists in the Montana General Fund, meaning it can be used for a variety of spending, depending on the decisions of the executive and legislative branches.

Montana’s surplus is a unique opportunity. We are in a time of high inflation, a possible recession, and recovery from years of pandemic response. The decisions that we make now will impact our kids for their whole school career and families as they raise their kids. How the state invests this surplus will impact our communities for years, just as we have seen previous budget cuts hinder our communities. Budget cuts and the lack of investment do not set communities up for success in the best of times, and impede a community’s ability to respond in the harder times. The 2023 Legislature must seize this opportunity to invest our collective state resources to ultimately lead to significant positive returns in local economies and communities’ health, safety, and futures statewide.

[8] Montana 65th Legislature, “An Act Providing Funding and Authorization for Capital and Infrastructure Projects Statewide”, HB 645, as passed on 2nd reading by the House of Representatives on Mar 29, 2017.