The Federal Budget Matters to Montana

Jackie Semmens | May 2022 | Presented by the Montana Budget & Policy Center

A strong federal budget matters to Montana. The funding the state receives is a vital source of revenue and helps ensure our communities are healthy and thriving. Federal revenue supports our schools, highways, health care system, and economy. It also provides a safety net when families and individuals encounter struggles.

Montana policymakers have turned down opportunities to fully utilize federal funds, a move which particularly disadvantages Black, Indigenous, and people of color (BIPOC) and Montanans living on low incomes, which impacts everyone in the state. The state has an obligation to fully accept, utilize, and build upon federal investments that can help make Montana into a place where race or economic background does not influence outcomes.

How the Federal Budget Works

The federal budget contains three main areas of spending: interest spending on debt, spending on mandatory programs, and spending on discretionary programs. Mandatory programs are permanently in the budget, including the three largest entitlement programs (programs recipients can receive automatically if they meet the eligibility requirements): Social Security, Medicare, and Medicaid. Other mandatory spending programs include the Supplemental Nutrition Assistance Program (SNAP), federal and military retirement benefits, veteran’s disability benefits, and unemployment insurance. Mandatory spending makes up 61 percent of the federal budget. Mandatory spending is renewed at set levels, unless changed by Congress, however, discretionary spending must be appropriated by Congress.[1]

The Federal Budget is a Key Source of Revenue for Montana

In FY21, Montana received $14.7 billion in federal spending, amounting to over $14,000 on average per person. Prior to the pandemic, spending was more modest yet still significant, with the federal government sending $9.7 billion to the state in FY19.[2] The federal government spends money in Montana in four main ways: direct assistance, such as Social Security or Medicare; wages for federal employees and contracts; and grants to local governments and the state.[3]

The most significant source of federal funds in Montana comes from grants given directly to the state. For FY22 and FY23, Montana’s state budget is $12.6 billion for the biennium, and nearly half (49%) of this comes from federal funding.[5] The Department of Public Health and Human Services receives most of this funding primarily for Medicaid. In federal fiscal year 2017, two-thirds of federal grants to states were for Medicaid, with support for income security (13%), transportation (8%), education (6%), and other (5%) comprising the rest of the grants.[6]

County and local governments receive payments directly from the government. Payments in Lieu of Taxes (PILT), for example, replaces the property tax revenue counties are unable to collect on federal land within their borders. PILT is an important source of revenue for rural areas, and in FY21, Montana counties received $36 million in PILT.[7]

Because the federal government has legally binding trust and treaty obligations to tribal nations, 58 percent of tribal government’s revenue is federal funds.[8] These transfers include funding for public schools and tribal colleges, housing, Indian Health Service (IHS), and Bureau of Indian Affairs (BIA). But the federal government has never fully met its obligations to tribal nations and has chronically underfunded these services.[9] 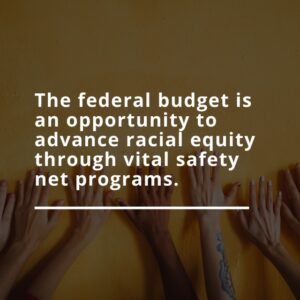 Federal funds are critical to the infrastructure of our communities, including roads and schools, but funding of the safety net is equally essential. Montana families and individuals faced challenges long before the pandemic began, and many of these challenges were exacerbated by the public health crisis. In 2019, 12.6 percent of Montanans lived below the poverty level, including 10.9 percent of white Montanans and 31.9 percent of American Indians due to the structural barriers and racism American Indians face, including discrimination in education, employment, and housing.[10]

Without broad social supports from the federal government, the COVID-19 pandemic would have had far more devastating economic impacts than it did. Nevertheless, many households still rely on the federal safety net like Medicaid, SNAP, and Children’s Health Insurance Program for support.[11] This support is particularly important for BIPOC in Montana who have experienced systemic racism through discriminatory employment and housing practices. Combined with the lack of government investment in education and health care, these discriminatory practices have led to increased poverty rates. Federal investments can help advance racial equity by funding programs meant to mitigate poverty created by structural racism and provide equitable education, health care, and opportunity to all communities. 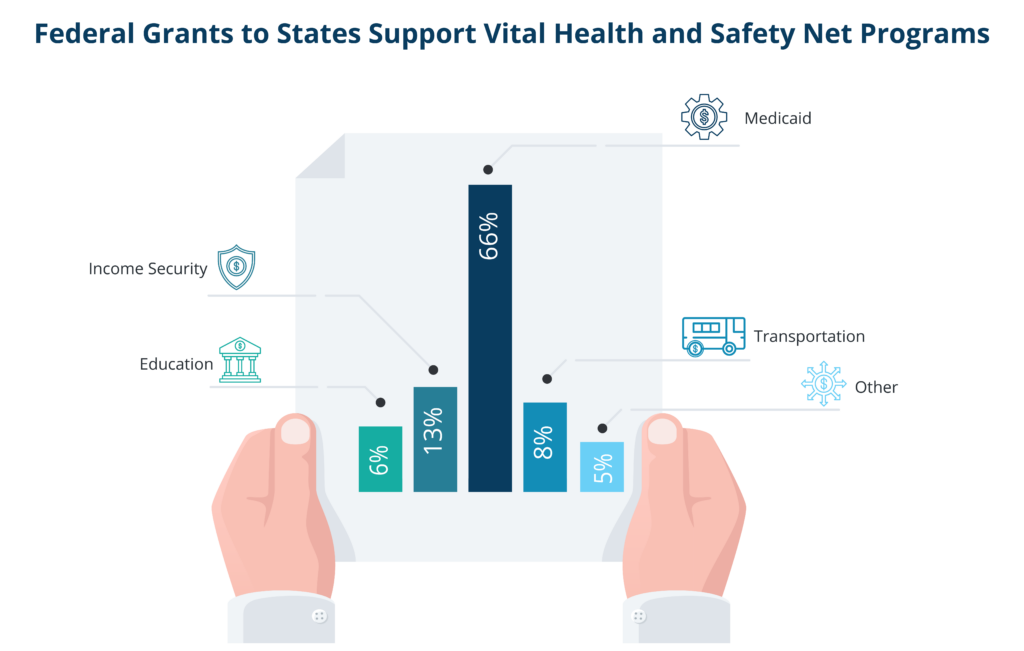 Medicaid spending accounted for more than a quarter of the state budget in 2019, with three-quarters paid for by the federal government totaling $650 million in federal spending annually.[12] The state provides just 10 percent of the costs of the expansion program, with the federal government paying the remaining 90 percent. Additionally, Indian Health Services (IHS) and Tribal Services receive 100 percent funding because the federal government has a legal obligation to provide health care to tribal nations. While it has consistently failed to fully meet this obligation, Medicaid expansion has helped to increase access to health care for American Indians in Montana. Medicaid expansion has provided preventative services such as cancer screenings and diabetes screenings, as well as treatment for chronic illnesses.

The Supplemental Nutrition Assistance Program (SNAP) is a vital source of food security for Montanans, benefiting nearly 90,000 people in the state in December 2021.[13] In December of 2021, SNAP recipients in Montana received nearly $13.6 million in benefits. SNAP benefits are fully funded by the federal government, and the administrative costs are split evenly by the state and federal government.

In addition to reducing hunger, SNAP benefits support the local economy, with 753 retailers in the state accepting SNAP benefits.[14] Many American Indians face food insecurity due to settler colonialism dismantling traditional food sources and living in areas far from grocery stores and food outlets.[15] SNAP helps support rural grocery stores and can help prevent hunger among BIPOC Montanans living on low incomes due to discrimination in employment or a lack of economic opportunities.

The Housing Choice Voucher (HCV) program is the nation’s major housing rental assistance program helping families living on poverty-level incomes, seniors, and those living with disabilities afford their homes. The HCV program reduces homelessness and lifts people out of poverty. A disproportionate number of Montanans who experience homelessness are people of color because people of color have been denied economic opportunities.[16] In 2021, housing vouchers supported 10,631 Montana households.[17] However, only a quarter of eligible households receive housing voucher assistance due to insufficient funding.[18]

TANF provides cash assistance to families living on very low incomes. However, racially charged cuts to the program in recent decades have resulted in very few families receiving cash assistance, and those who are, receiving only a small amount.[19] Racist narratives about program participants led to reductions in the 1980s and “welfare reform” in the 1990s that created behavioral requirements based on racist stereotypes.

These changes to TANF shifted the program from primarily cash assistance to a state-controlled block grant program that does not guarantee financial assistance for recipients. [20] Today, just one in four families (3,637 families) living in poverty in Montana receive TANF.[21] TANF is an under-utilized tool to help families maintain security when faced with a crisis, and by eliminating the racist components of the program, it can help reduce the racial equity gap while improving security for all participants.

Montanans benefit from other vital, federally funded social supports. Old-Age, Survivor, and Disability Insurance (OASDI), commonly known as Social Security, does not flow through the state coffers but goes directly to recipients. In 2020, 244,937 Montanans received Social Security benefits.[22] Similarly, Supplemental Security Income (SSI) is a federal cash assistance program that provides monthly assistance to people who are older than age 65, blind or disabled, or living on low incomes. SSI benefits also go directly to recipients and supports 17,491 people in the state. 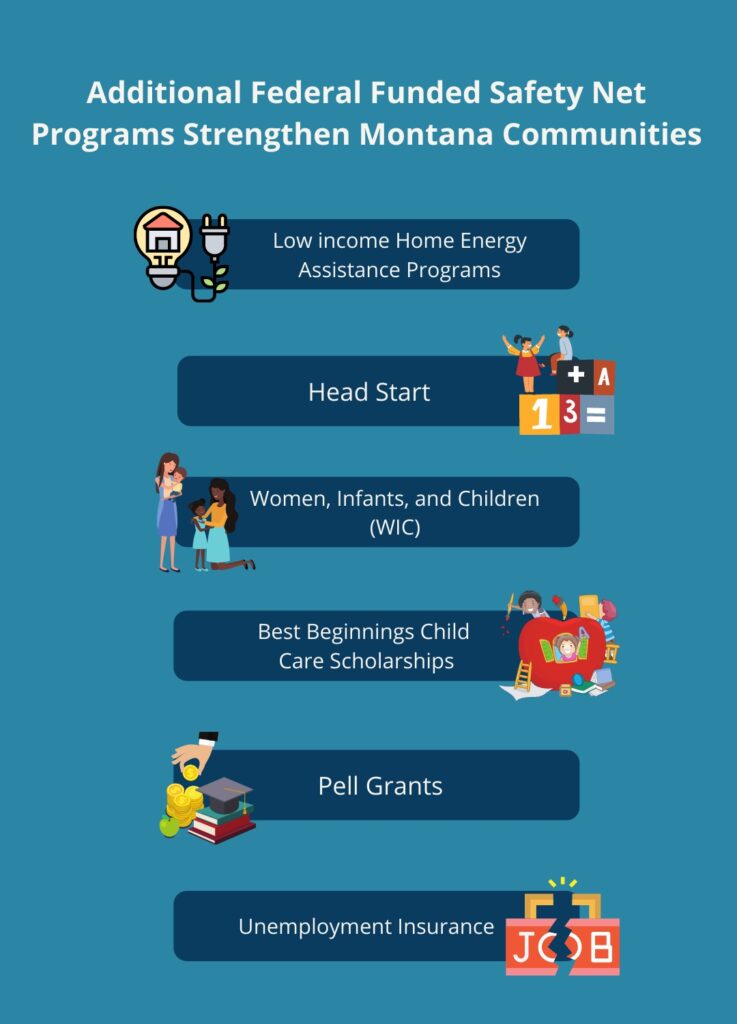 Federal Funds are an Opportunity to Increase Equity

The federal budget has never fully utilized its power to create equity for all Americans. Instead, it has prioritized revenue generation and spending in ways that have benefited the white, wealthy, and powerful. The federal government’s failure to fully invest in safety net programs, such as TANF or HCVs, as well as its failure to honor its legal obligations to tribal nations, have made it difficult for families to break free from generational cycles of poverty. People of color, who are more likely to rely on safety net programs due to discrimination in employment and education, are hurt the most when the federal government underinvests. But if properly allocated, federal funds are a significant opportunity to undo past harm and create a country where everyone can succeed.

While the federal budget is largely determined by Congress, state officials have a degree of decision-making power on if and how they spend federal money granted to the state. Montana has the responsibility to use all federal funds available to the state to reduce inequality, address generational poverty, and maximize opportunity for all Montanans.

Unfortunately, state officials have recently turned down federal investments. For example, Governor Gianforte refused to accept extended unemployment benefits during the COVID-19 pandemic.[25] Likewise, the state did not expand Medicaid for the first several years it was an option. By refusing to accept and spend the maximum federal funds available, state officials particularly harm BIPOC and Montanans living on low income. And in doing so, the entire state misses out on the benefits created by federal investments.

Montana also has the obligation to build upon federal investments by using state resources to further economic support. For example, Montana has created its own state Earned Income Tax Credit to help ease the tax burden for families living on low incomes. The state’s EITC is set at 3 percent of the federal government’s, helping to build upon the investments. Montana should ensure that its own revenues are making long-term investments to support equity and reduce generational poverty. 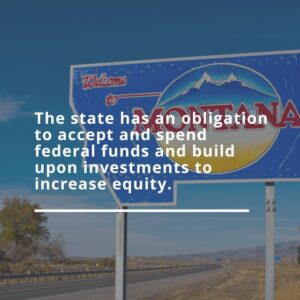 Federal spending is a vital source of revenue for Montana, and a strong federal budget matters to our state. To reduce inequity, the federal government must fully address harm created by past racist and discriminatory policies with investments in chronically underfunded communities. Federal lawmakers have the opportunity, through the budget, to promote equity by meeting its trust and treaty obligations to tribal nations, bolstering the safety net, and addressing inequities in the tax code. In turn, Montana policymakers must maximize federal funds available to the state and build upon these resources with state funds to more fully address inequity.

[4] Rockefeller Institute, “Who Gives and Who Gets? Explore the Balance of Payments between States and the Federal Government,” accessed Feb. 2022.

[6] Pew Charitable Trusts, “Two-thirds of Federal Grants to States are for Medicaid,” Dec. 2017.

[14] Center on Budget and Policy Priorities, “SNAP Is an Important Public-Private Partnership,” Dec. 2021.

[21] Center on Budget and Policy Priorities. “Cash Assistance Should Reach Many More in Montana Families to Lessen Hardship,” Nov. 2020.

[25] State of Montana Newsroom, “Montana to Launch Return-to-Work Bonuses, Return to Pre-pandemic Unemployment Program to Address Workforce Shortage,” May 2021.
PDF of this report
Support our work