Medicaid expansion was a big priority for the 2019 Montana Legislature. However, state budget and tax decisions of all kinds impact the social determinants of health, or the conditions in which people live, work, learn, and play. Focusing exclusively on health care ignores the importance of a wide variety of state and local investments in promoting better health, according to a recent report released by the Center on Budget and Policy Priorities.

Access to food, affordable housing, quality schools, parks, reliable transportation, public health infrastructure, and economic opportunity all influence whether people and communities are healthy. The Legislature determines how and where we make these types of investments, which means the Legislature also plays a big role in how, when, and if Montanans can access opportunities to be healthy.

Tax revenue is critical to funding the programs and services that support healthy people and communities. Yet, this legislative session, the Legislature failed to pass a number of reasonable proposals, like House Bill (HB) 697, that would have raised much-needed revenue.

Currently, Montanans on low incomes pay a higher share of their incomes in state and local taxes than do wealthy Montanans. Montana’s tax code is intentionally structured this way. HB 697, however, would have restored some tax fairness by revising individual income tax laws and restoring top income tax brackets on higher-income households.

In 2003, the Legislature made significant changes to Montana’s income tax system. Those changes have resulted in all Montanans making more than $17,900 today paying the same top tax rate. That means someone earning just over the minimum wage is paying the same top tax rate as a millionaire. As a result of the tax cuts, the wealthiest households experienced the greatest tax reductions. More than half of the reduction in income taxes went to households with incomes of more than $500,000. Not only does this tax break largely benefit high-income households, it disproportionately benefits white households. According to U.S. Census data, of Montana households making more than $100,000 in income, more than 96 percent of those households are white households.

By putting in place two top income tax brackets on incomes above $250,000 and $500,000, HB 697 would have increased general fund revenue by more than $45 million across the next two fiscal years by helping the wealthiest pay their fair share. However, the House Tax Committee voted party-line, 7-11, killing the bill. With an additional $45 million, we could have more than fully funded a statewide preschool program, greatly improving Montana children’s readiness for school and improving long-term health, learning, and earning outcomes.

When wealthy Montanans do not pay their fair share, Montana communities suffer, as we struggle to invest in the programs and services that promote good health.

Montanans of Color Are Disproportionately Denied Opportunities to Be Healthy

Families on low incomes, who are disproportionately families of color, are more likely to live in under-resourced communities that more often are lacking in things like access to healthy foods, good jobs, and quality schools. According to the National Equity Atlas, 31.7 percent of all Montanans of color lived in poverty in 2015, more than double the rate of 13.2 percent for white Montanans. This is no coincidence. A number of factors come into play, including discrimination and income and wealth inequality.

Median hourly wages in Montana systematically vary by race, a trend that holds true across education levels. Among full-time workers with a bachelor’s degree in 2015, for example, Montanans of color made $19 per hour, while white Montanans made $24 per hour. Assuming a 40-hour work week and 52 weeks worked, that amounts to $10,400 in wages lost in one year. 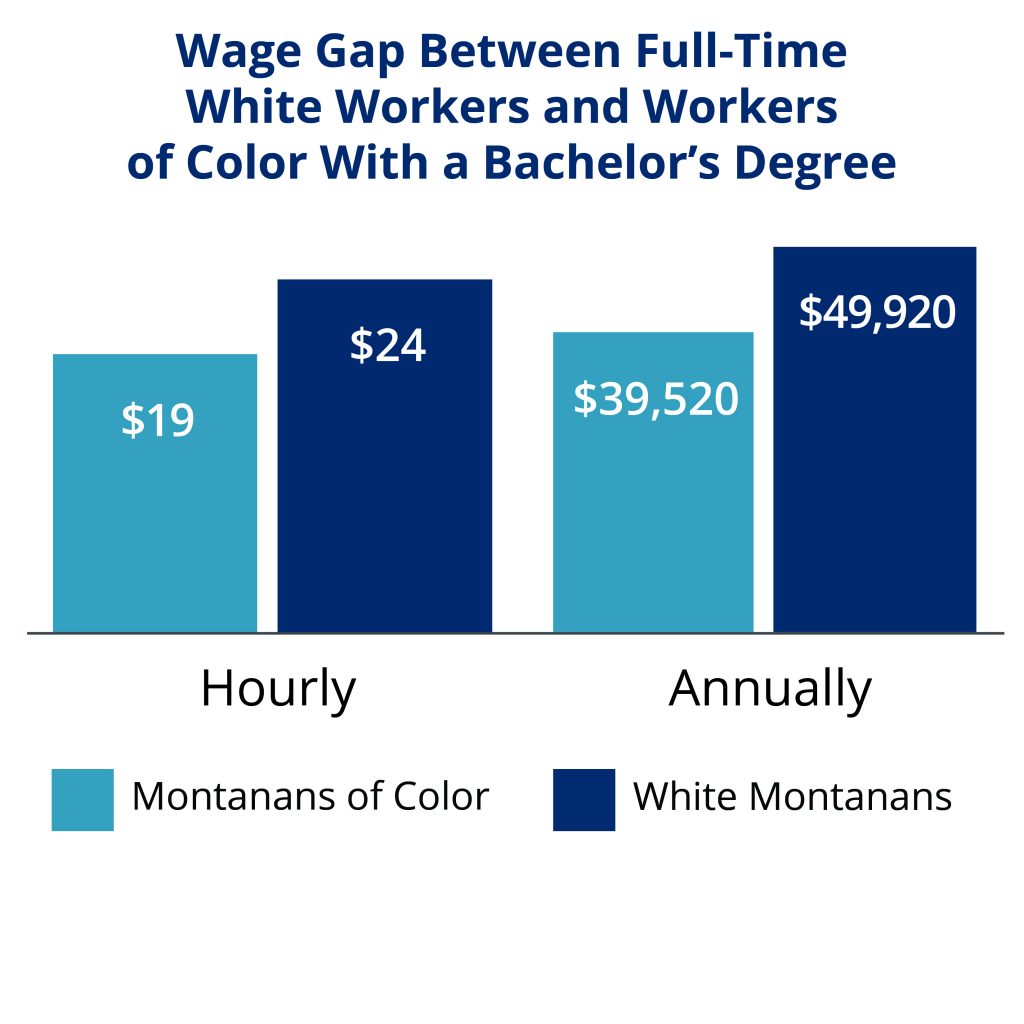 There are deep connections between inequality, poverty, and health. Poverty prevents families from saving for future health-related costs or even from paying for health services today, making it harder to stay healthy and, thus, harder to find and keep work.

Access to economic opportunity and opportunities to be healthy impact how long and how well we live. Data tells us that Montanans of color are more likely than white Montanans to report having poor or fair health, are less likely to have health insurance, and are less likely able to get needed medical care because of cost. These differences hurt all Montanans by impacting our shared prosperity.

The Legislature Helps Decide Who Has Opportunities to Be Healthy

While not necessarily explicitly race-based, state budget and tax decisions often exacerbate racial inequalities in power and wealth. Tax cuts that have largely benefited special interests leave Montanans on low incomes, who are disproportionately people of color, paying a greater share of their incomes in taxes than wealthy Montanans, who are overwhelmingly white. Making the tax code more progressive would mean wealthy Montanans would start paying their fair share. This would leave us better able to make important investments in our communities and give all Montanans, regardless of place or race, access to parks, healthy food, clean air, and all of the other ingredients that make healthy communities.