For generations, our tax dollars have served as shared investments in the programs and services that make our state a great place to live, work, and play.Tax dollars enable Montanans to work together for those things which we could not achieve alone, like educating our children, building infrastructure, keeping our air and water clean, and paving the way to a strong economy for everyone. 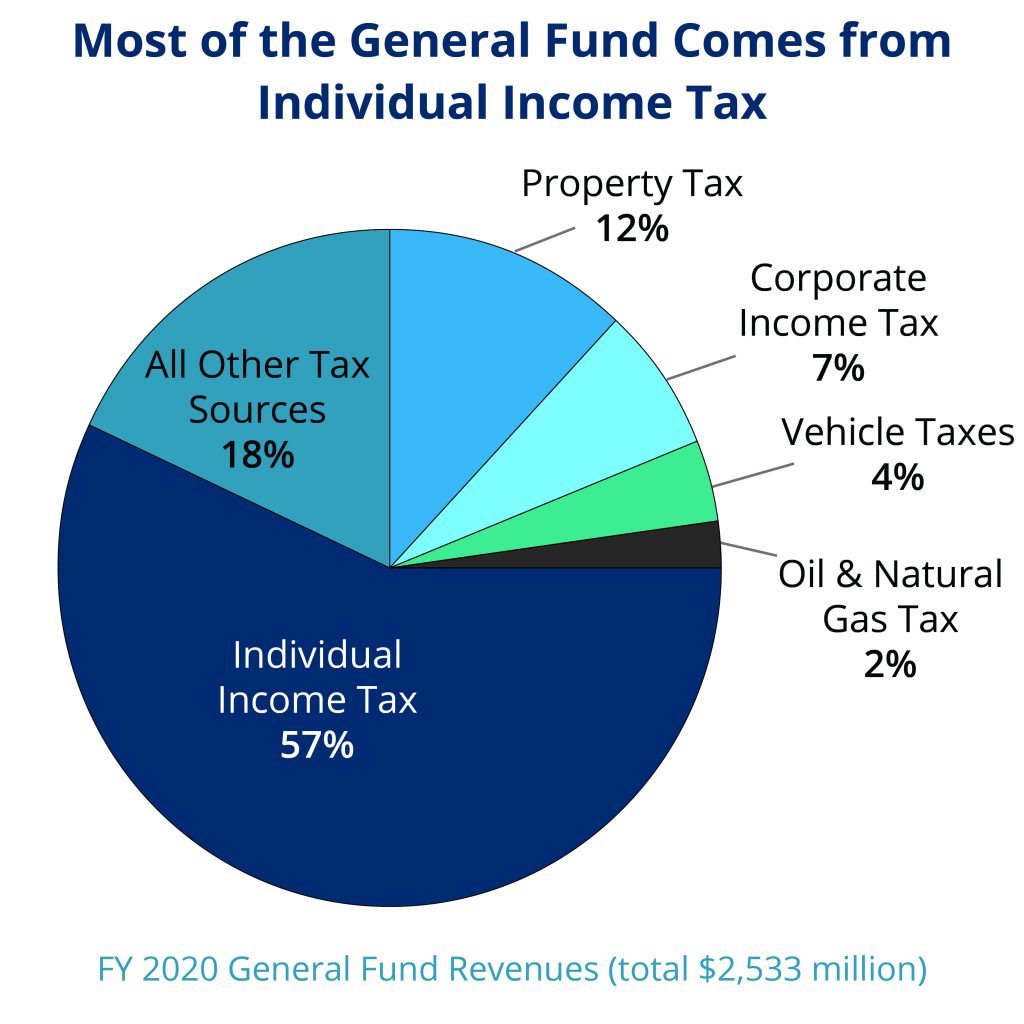 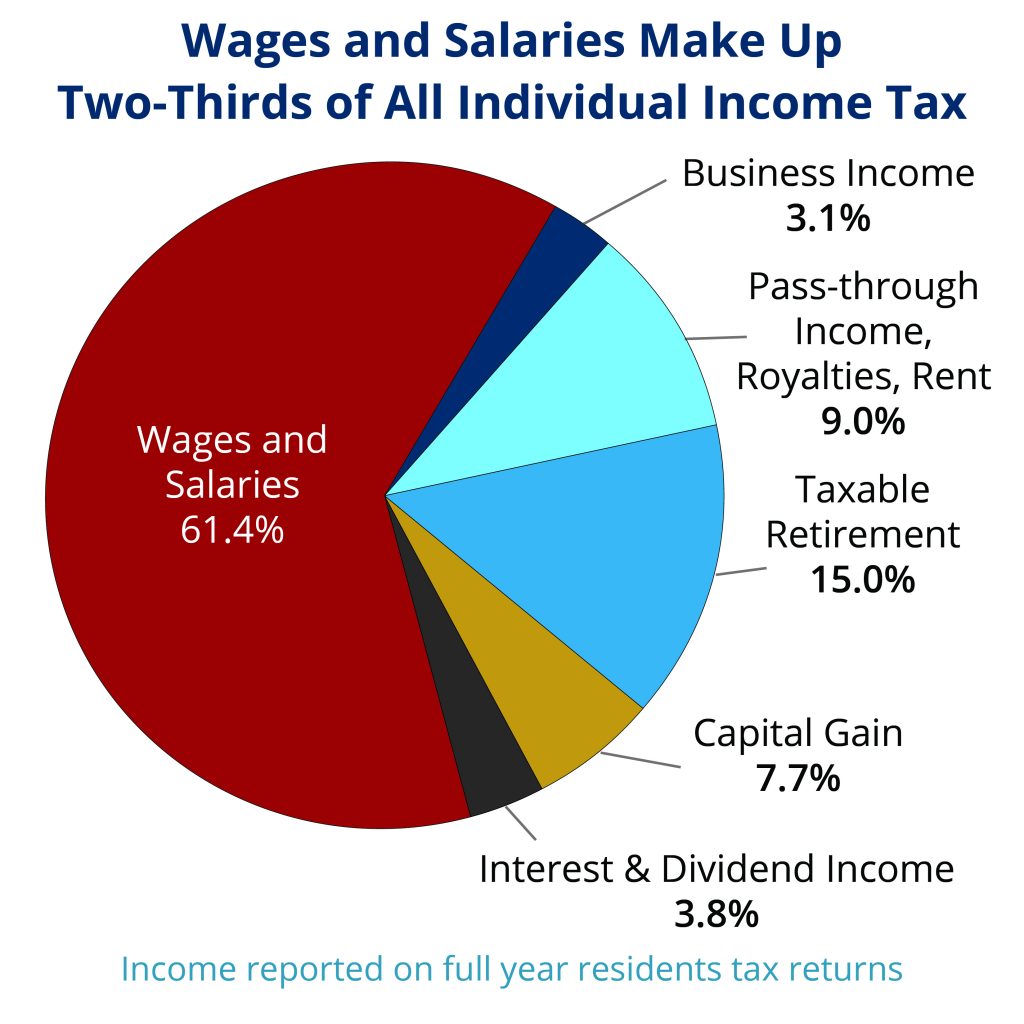 Specifically, if the business is structured as a C-corporation in order to receive the legal benefits associated with such a status, its taxes would be classified as corporate income taxes. All other businesses, including sole proprietorships, partnerships, limited liability corporations, and S-corporations, report income on individual returns, and this amount is reflected in both pass-through income and business income, which comprises less than 13 percent of total individual income.[3]

In 2003, the Montana Legislature made harmful changes to our income tax system. That year, legislators passed a bill that greatly altered Montana’s tax system by providing a significant tax cut for the wealthiest households.[4] The changes made in 2003 included collapsing the income tax brackets and creating a tax cut for capital gains income. Both of these provisions make our tax system more regressive, giving a greater tax cut to high-income households and costing the state nearly a billion dollars in revenue in the decade from 2005 to 2016, which could have been used to invest in our future.[5] 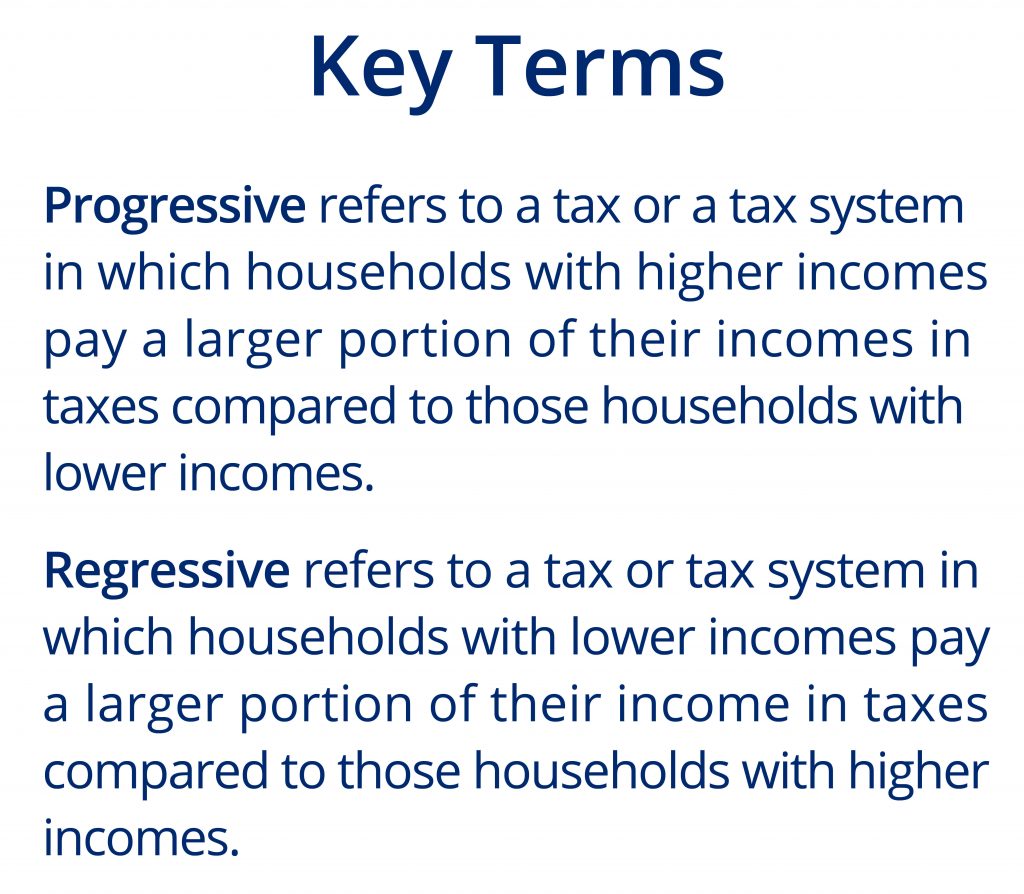 The changes in 2003 reduced the total number of income brackets to seven. In 2019, the top bracket now includes all households making more than $18,400.[7] That means someone earning just above the minimum wage now faces the same top marginal tax rate as someone making $1 million. As a result of the 2003 tax cuts, the wealthiest households experienced the greatest tax reductions. Almost half (47.6 percent) of the reduction in income taxes went to households with incomes of more than $500,000, the top 0.4 percent of taxpayers, whose average tax reduction was $30,499. For the bottom 81 percent of Montana taxpayers, the average tax cut was just $23.[8] 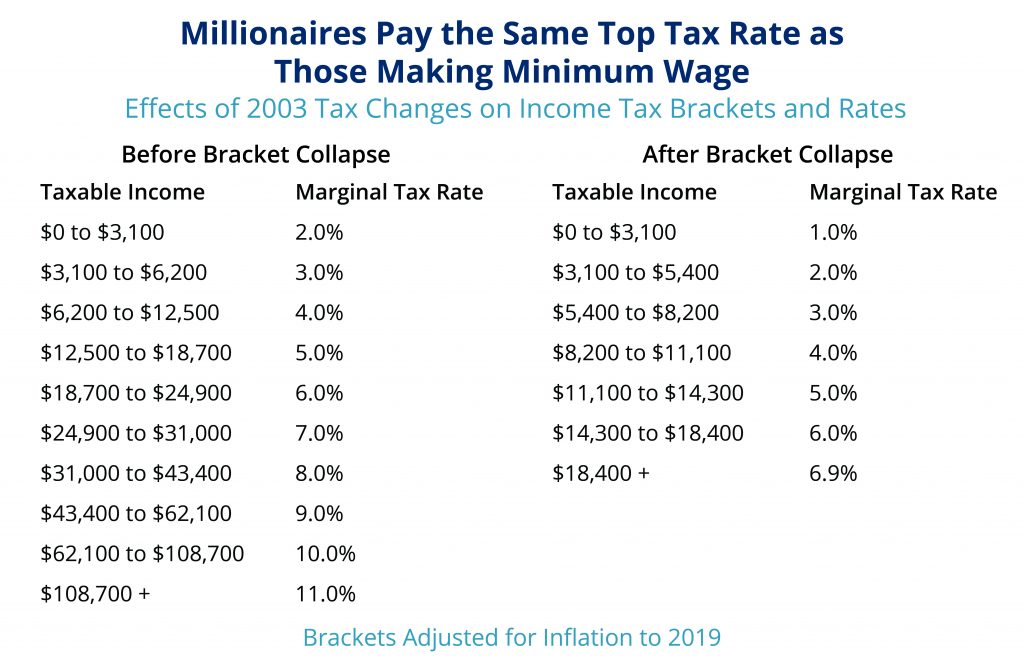 As a whole, these tax cuts have created a more regressive income tax structure. In fact, while our individual income tax remains slightly progressive, it is not progressive enough to offset the regressivity of our property taxes and selective sales and excise taxes.[9] In other words, when looking at the entire tax system in Montana, taxpayers with lower wages pay a larger portion of their income in taxes compared to those with higher incomes.

The changes have also had a negative impact on Montana’s revenue. In the first decade following the 2003 tax cuts, it is estimated that the state lost one billion dollars in revenue.[10] This lost revenue could have been used to educate our children, keep our communities safe, and protect our land and water, instead of cutting taxes for those who need it the least.

For further information about the income tax bracket collapse, see Montana Budget & Policy Center’s report, The Montana We Could Be: Tax cuts, aimed at the rich, take a toll. 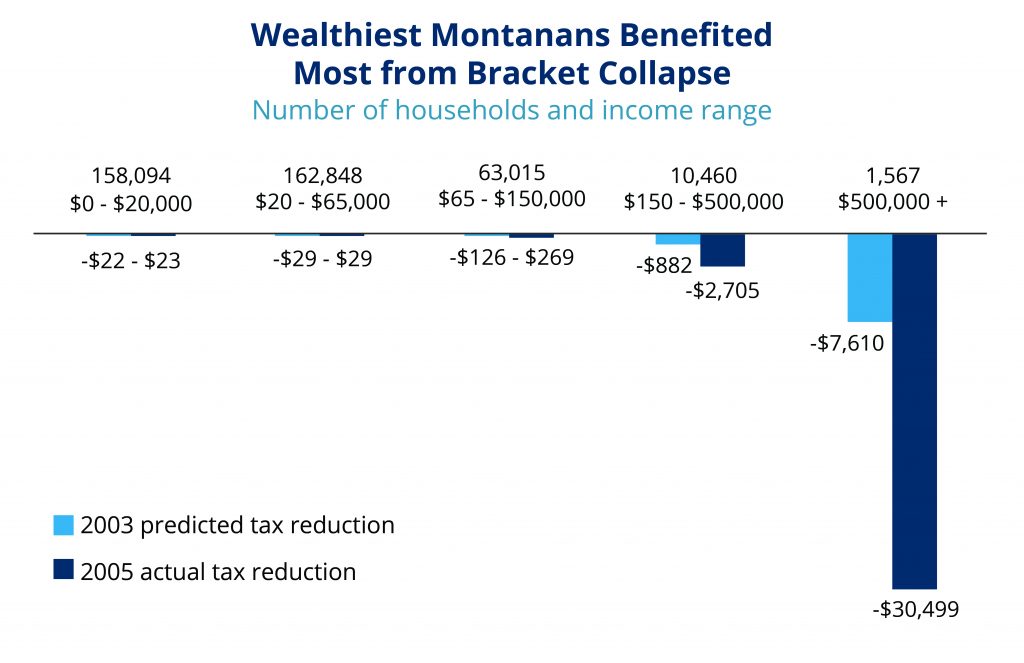 Currently, Montana is one of only nine states that offer significant tax breaks for capital gains.[11] The capital gains credit has proven to be unaffordable, is unfair to Montanans who earn income through wages, and has not benefited the Montana economy.[12]

The capital gains credit lowers the effective tax rate for people who earn income through investments compared to those who earn income from wages. This creates a tax system that favors wealth over work. In 2018, more than half of the benefits from the credit went to the wealthiest one percent of taxpayers (just 4,713 households in Montana).[13] 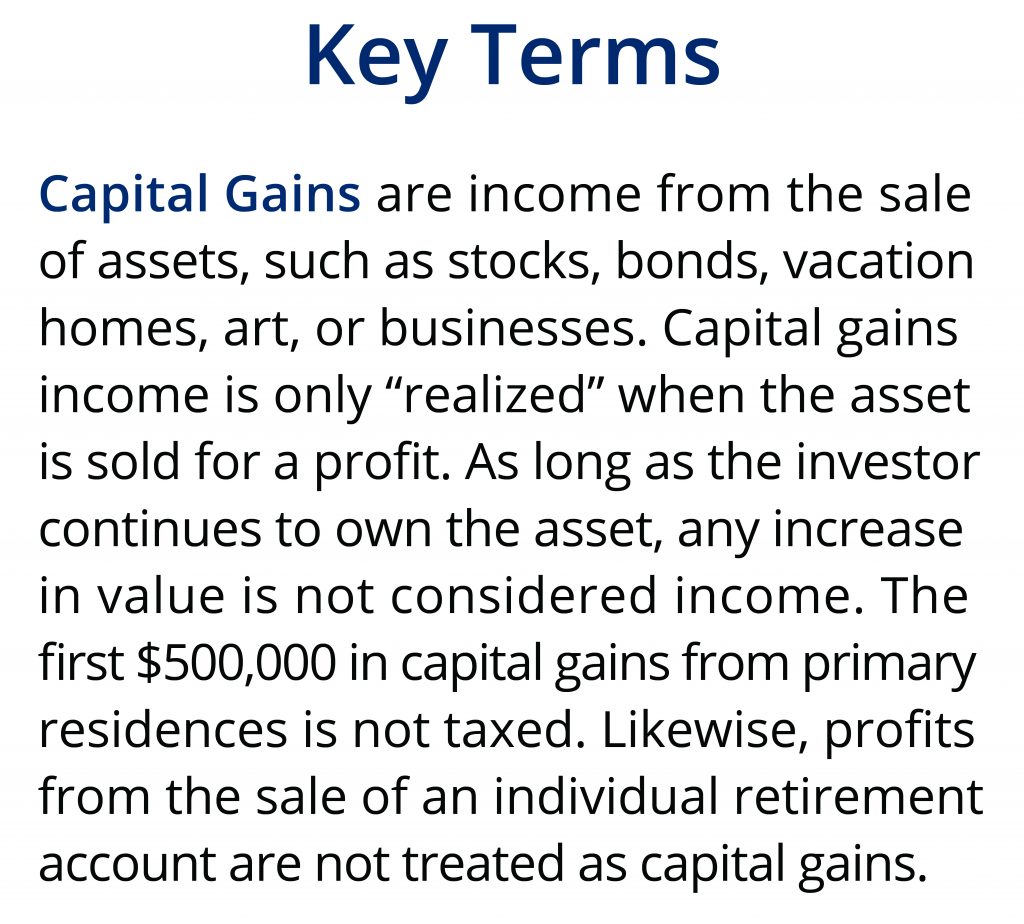 Nearly all Montanans who earn lower and middle incomes do not benefit from the credit because they are much more likely to earn their income on the job rather than through the sale of large assets. In 2017, more than 78 percent of Montana taxpayers – more than 448,000 taxpayers – did not receive any benefit from the capital gains credit.[14] In fact, the assets owned by most Montanans – primary residences and retirement funds – are not treated as capital gains income when they are sold.

Treating capital gains more favorably than wages will not help the economy. In fact, the lost tax revenue could actually prevent growth by forcing state budget cuts. The capital gains credit cost Montana more than $55 million in 2018.[15] These vital dollars could have been used to fund growth-oriented services like education, health care, and infrastructure improvements.

Prior to the 2017 session, Montana required families living on poverty-level incomes to pay more in income taxes than almost all other states.[18] A state EITC is an effective tool to help people rise about poverty-level incomes by putting more money in the pockets of families to spend on groceries or catch up on bills. However, Montana can do more to improve the economic security of families living on low incomes by increasing the credit amount. Among the 29 states and District of Columbia that offer a state EITC, Montana’s 3 percent credit is the lowest.[19] Raising the value of the credit to 10 percent of the federal credit, similar to Colorado and Nebraska, would result in a maximum benefit of $666, and will go further in helping families meet their basic needs.[20]

Montana is one of just six states that still has a deduction for federal income taxes paid, a deduction that disproportionately benefits the highest income earners in the state and costs the state much-needed revenue.[21] In 2017, this deduction cost $94.2 million.[22]

Eliminating this deduction would impact a little more than one-third of taxpayers overall, with more than two-thirds of the tax increase going to the top 20 percent of taxpayers. Halving the deduction from $5,000 to $2,500 per spouse would generate $27 million in revenue for the state.[24]

Generally, all individual tribal citizens are subject to federal income taxes. The exception to this is income derived directly from allotted trust lands or treaty fishing rights.[25] In Montana, tribal citizens are also subject to state income taxes if they live or work off the reservation where they are enrolled.[26] In 2019, 40 percent of American Indians resided off-reservation in Montana, and many more American Indians living on their reservation were working in nearby communities.[27]

Tribal governments, like federal and state governments, have the right to tax the income of their own citizens, but few, if any, actually do. Each tribal nation has its own reasons stemming from its unique history and cultural views on the matter. Today, infringement upon tribal sovereignty, systemic racism and present-day discrimination play into a system of lower incomes and higher rates of unemployment on many reservations, contributing to the unfeasibility of taxing tribal citizen income. In Montana, 14 to 41 percent of reservation residents live in households with poverty-level incomes.[30] Likewise, unemployment on some reservations in the state is as high as 31.1 percent.[31] 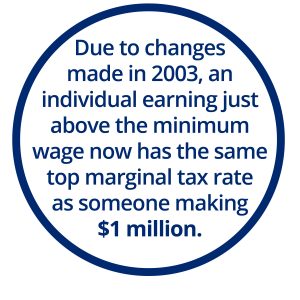 our communities stronger, safer, healthier, and more prosperous. Montana can make better choices that do not put the greatest weight on those making the least. The following reforms would greatly strengthen Montana’s income tax system:

[6] These brackets correspond to varying amounts of taxable income.  Taxable income is income after deductions and exemptions have been subtracted.

[8] Montana Department of Revenue, “The Revenue and Taxpayer Impacts of the Income Tax Provisions of SB 407.” Dec. 2006.

[9] Institute on Taxation and Economic Policy, “Who Pays? A Distributional Analysis of the Tax Systems in all 50 States, Montana: State and Local Taxes,” Oct. 2018.

[21] Institute on Taxation and Economic Policy, “Who Pays? A Distributional Analysis of the Tax Systems in all 50 States, Montana: State and Local Taxes,” Oct. 2018.

[24] Institute on Taxation and Economic Policy, 2015, on file with author.